In Part Two of my blog on 2nd/Lt.Alan Reeve, we visit the Captain of the Bristol F2B Fighter, Captain Henry Russell Child, the story of being shot down by the Red Baron and the tragic death of Alan Reeve's brother, Sergeant Frederick Reeve #172285, 19th Battalion, C.E.F.

PART TWO - Like Alan Reeve, Henry Child was a veteran of the Infantry Corps. He was a west London native born March 27, 1895 and coming from a upper middle class family in northwest Harlesden. Early in the war 1914, he received his commission with the 21st (4th Public Schools) City of London Regiment Royal Fusiliers. He entered France November 14, 1915 with that Battalion. This battalion was disbanded April 24, 1916 "as many of the men had gone to take commissions". Later in that year Lieutenant Henry Russell Child obtained permission to take flying instruction at the Grahame-White School in Hendon. He received his Royal Aero Club Aviators Certificate #4188 on Feb. 3, 1917 and eventually found himself posted to the 11th Squadron, Royal Flying Corps in France as a 2nd Lieut. A connection with the 2nd Regiment Queen's Own Rifles and Alan Reeve was the top Ace of 11th Squadron with 30 kills Canadian Squadron Leader Andrew McKeever of Listowel, Ontario, a member of that Regiment while attending school in Toronto and who served with the 58th Battalion in France. 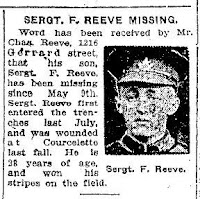 Child was soon promoted to Captain and was matched with 2nd Lieut. Alan Reeve in early 1918 who flew as the Observer in the 2-seat Bristol F2B Fighter/Reconnaisance aircraft. They flew a number of missions together. However on March 27, 1918, Bristol aircraft #B1332 with Child/Reeves aboard was flying a reconnaisance mission over Chuignolles, south of Bray-sur-Somme in the Somme when at 16:35 they were shot down behind German lines. According to author Floyd Gibbons in his The Red Knight of Germany Child and Reeve in Bristol B1332 were the 73rd Victim of the Red Baron, Baron von Richthofen. Although there are several military cemeteries close to the crash site that contain unidentified flyers from the Royal Flying Corps, Child and Reeve are both commemorated on the Arras Flying Services Memorial. There actual graves remain waiting to be discovered. 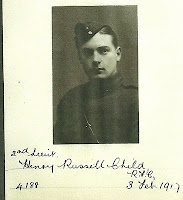 The twin bother of Lieut. Alan Reeve was Frederick Reeve. Frederick enlisted as a Private in Toronto with the Queen's Own Rifles 83rd Battalion, service number 172285. He embarked with the 83rd from Halifax on the S.S. Olympic. On August 18, 1916, Frederick was taken on service to Toronto's 19th Battalion, being quickly promoted to the rank of Sergeant on March 29, 1917. However, on May 9, 1917 during a period the 19th Battalion held the trenches near Dickenbusch in "Spoilbank Trench", he was listed as Missing In Action. His name is commemorated with honour on the Vimy Memorial.
Posted by Bob at 7:09 AM
Labels: CAPTAIN HENRY RUSSEL CHILD, R.F.C.

An article for 2nd. Lieut. Alan Reeve appeared in the Toronto Star on June 7th, 1916. Transcription:

REEVE IS DOING WELL.
The official telegram announcing Sergt. Alan Reeve's wounding, was preceded by a private cable from his brother Charles, to their mother at 1216 Gerrard st., on June 5, as follows: "Saw Alan yesterday, Romany Cottage, Hospital, Whitestable, Kent, wounded, right arm. Doing well. Don't worry." Sergt. Alan, more generally known as "Happy," Reeve, enlisted at the very first as a private in an overseas battalion. He got one stripe at Salisbury, and was made sergeant after going to the front. He has been through the Ypres, Langemarck, and Festubert struggle unhurt. He was only 18 years old when war broke out, but already had the reputation of a great sport. A member of the Don Rowing Club, he rowed against the Argos. He was employed in the office of Mackenzie and Mann. He has two brothers and two brothers-in-law in the Canadian service.

A belated thanks very much, Marika. We still haven't given up hope of locating the bodies of Alan Reeveand Henry Child. They may be lying as unidentified RAF in a Somme cemetery.