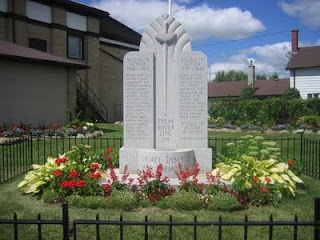 In a continuation from my last blog concerning Adam Sandy and the Halifax Explosion, the original soldier I was following on the Halifax Memorial was Private Alphonse Gosselin #3056616. His name is included as well on the Omemee, Ontario District War Memorial, the closest village to our former summer residence on Pigeon Lake.

I have submitted and had published the following story about Gosselin and the troopship S.S. City of Cairo in The Maple Leaf, Journal of the Western Front Association, Central Ontario Branch and the fine website on the S.S. City of Cairo authored by Scotsman, Hugh MacLean.

"I first became aware of the troopship S.S. City of Cairo when while recently investigating the 19 World War I names on th

e Omemee District War Memorial (Omemee, small Central Ontario resort village in the Kawarthas of 1200 inhabitants presently). Omemee has gained some notoriety lately as the former original home of Canada's last remaining soldier, Private Lloyd Clemett (and his 3 brothers) whose former residence was the wooden frame house still located at #10 King Street in the village. Many of the names on the Cenotaph relate to the area's 109th (Victoria and Haliburton) Battalion, based in nearby Lindsay. Omemee is also a boyhood home of Neil Young, who allegedly wrote his hit song Helpless after the living in the village as a young man. It is also the family home of Lady Flora McCrea Eaton, wife of Sir John Craig Eaton. The local elementary school is named in her honour. I was curious about Private Gosselin because as a Military Service Act 1917 conscript, his name was mentioned on the Halifax Memorial and because his date of death was listed as being only 26 days after being drafted in Lindsay, ON . On further investigation of his death date, I found a number of other men that died that same day or close to it also listed on the Halifax Memorial.

Thinking that the Memorial was used only for sailors that died at sea during the two World Wars, I was determined to find the source of the deaths of these young men. I was able to locate a reference to the loss of these soldiers on that date confirming my suspicions in The History of the Canadian Forces, 1914-1919 Medical Services, Sir Andrew McPhail. Here McPhail states in considerable detail that this time period was the peak of the worldwide Spanish Influenza epidemic. I was to learn that on the three troopships that had departed Canada in September, 1918, a total of 99 deaths occurred at sea and many more on arrival in England. These ships were: the S.S. City of Cairo; S.S. Victoria and the S.S./ Hunstead. My man Private Gosselin was 21 years old, a single farm labourer, possibly born in Quebec but working on a farm in Downeyville, a small community near the village of Omemee. He was included in Draft #175, Eastern Ontario Regiment, 1st Depot Battalion consisting of 1 officer and 50 soldiers who boarded the S.S. City of Cairo in Montreal that fatal September. Three of his mates from this Kingston, ON unit also succumbed to the flu while in transit. 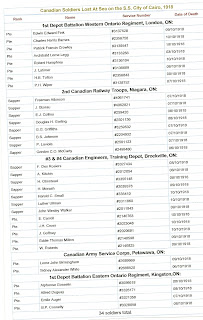 075 passengers, the majority of which (1057) were Canadian reinforcement soldiers for the Canadian Expeditionary Force and included six nursing sisters and a number of medical doctors. "Nearly all on board were sick and there were 32 deaths at sea. On arrival 244 flu cases were transferred to hospital, of which 114 were carried in on stretchers". The S.S. Hunstead and the S.S. Victoria had very similar numbers. With a brief stop in the Port of Quebec City September 28, she landed in England Port of Devonport (Plymouth) October 11, 1918".

All the names listed above can be found on the Halifax Memorial, Halifax, Nova Scotia.

MAY THEY REST IN PEACE!

Special thanks to Hugh A. MacLean and to Tony Jones for his photos of the S.S. City of Cairo

Posted by Bob at 10:07 AM
Labels: CITY OF CAIRO AND FLU EPIDEMIC