TORONTO'S PROPECT CEMETERY - BURIAL PLACE OF SOLDIERS
Toronto's Prospect Cemetery has appeared in one form or another in a number of posts in this blog. The cemetery has also played an integral part in my wife's Father's Alexander Family. For it was here that provided employment for Lynn's Grandfather, Aaron Alexander, after he emigrated in the late 1920's from Castleblayney,Ireland at the age of 57 with 7 children. He found a job as a gardener in the grounds while the family moved into a house on nearby Ashburnham Road. We as well have a connection to Prospect through the Rt Rev Sydney E. Lambert. Rev. Lambert was an honorary Lt.-Col. from the Great War. He lost a leg on Vimy Ridge while acting as Captain Chaplain for the 50th Battalion. He when on- post war to found the War Amps. However by the 1930 he was posted to a United Church in the neighbourhood of Prospect cemetery and got to know Prospect gardener Aaron Alexander, from services at Prospect. So when my wife's parent were married in 1939, it was only natural to enlist the services of Rev. Lambert.
The  cemetery is far more that a burial place. It is a place of beauty, a record of local history, a place of quiet and of interest - a place for the living with over 150 species of trees planted by the owners, Toronto Trust Cemeteries.  In short, an ideal location for the final resting burial place for war veterans. Prospect Cemetery was established in 1890 (14 years after larger Mount Pleasant Cemetery). Extending north from St. Clair Avenue, it consisted of the 106 acre Shields Family farm, the farmhouse and outbuildings.Although extending all the way north to Eglinton Ave., it wasn't until 1939 that the grounds were opened that far north. An American, Joseph Earnshaw painstakingly laid out the grounds in 1889 and generally his plan has been followed in the intervening years. With the advent of World War I came the need of a place to honour Canada's war dead. In late 1917, The Veteran's Burial Plot, a section set aside solely for the burial of Canadian and Commonwealth veterans of the First World War, was developed by Prospect Cemetery. When it opened the cemetery had no intersecting roads, however in the intervening years, both Rogers Road and Kitchener Avenue were built to intersect the cemetery grounds which today is divided into 3 distinct sections.
Until the Veteran's Section was opened late 1917, all war burials were either buried in existing family plots or more likely in open plots in the existing active cemetery section being used for indigent burials, usually Section 17. This section now is where we find most early World War I burials. A most distinctive burial ground in its own right, the Veteran's Section is an integral part of Prospect Cemetery. The five-acre oval plot was set aside initially to provide a fitting burial ground for those who returned from the horrors of the war - wounded, gassed or shell-shocked. Discussions took place during the winter of 1916-17, between the Trustees of the Toronto General Burying Grounds and representative of the Great War Veterans Association (G.W.V.A.) and a report presented  by the Superintendent of Prospect Cemetery, P.D. Clark, was favourably received. It was believed that only in this way a dignified burial could be assured for all Toronto veterans. It would also ensure that each grave be given uniform treatment, and would simplify the holding of Memorial Services, the decoration of graves and the considerate staging of military funerals, which require ample space. Following a meeting held on May 23, 1917, in City Hall, attended by representatives of many civic organizations, these approvals were given approval. The plot contains 5,258 graves, each identified with a simple flat mounted marker of durable Canadian granite, containing a brief description.
The distinguished architect, Sir Edwin Lutyens, A.R.A., whose work included the parliament buildings in India, designed the elegant cruciform Cross of Sacrifice, which was officially sanctioned by the Imperial (later Commonwealth) War Graves Commission.Each year, as has been the customs since 1928, there is an annual Remembrance Service in Prospect Cemetery ,lead by member of the Royal Canadian Legion, Earlscourt Branch 65. To my knowledge, there is no realistic court of war veterans buried in Prospect Cemetery. Additional area on the east perimeter of the Veteran's Section in sections 1 and 10 has been opened up. Of course many thousands of veterans are buried in family plots, with or without notification of their veterans status on the headstones. Today, the Commonwealth War Graves Commission, meaning deaths during or as a results of war, show a total of 642 war graves in various sections of the cemetery. Of this amount, 396 are show to be World War I burials or attributable to the war - from Abernethy, William #294387 to Yule, Patrick #3040905. There are soldiers buried in Prospect of every rank and three Victoria Cross winners: Colin Fraser Barron, 3rd Battalion; Walter Leigh Rayfield, 7th Battalion; George Richardson, 34th Regiment, British Army 1859.


During the First World War, Toronto was the headquarters of Military District No 2 and the city contained 15 military hospitals with almost 3,500 beds. During the Second World War, No 2 Vocational Training School was posted to Toronto and the Royal Norwegian Air Force had a training camp there.Toronto (Prospect) Cemetery contains 394 Commonwealth burials of the First World War, many of them in the veterans plot in Section 7, where there is also a Cross of Sacrifice dedicated to all war casualties buried in the cemetery. Of the 248 Second World War burials, some are in the naval and military plot in Section 1, the rest are scattered.

Colin Fraser Barron was born on 20 September 1893 in Baldavie, Scotland. He came to Canada in 1910 and enlisted in the Canadian Expeditionary Force (CEF) in 1914. Corporal Barron earned the Victoria Cross on 6 November 1917 near Passchendaele in Belgium while serving with the 3rd Infantry Battalion, CEF. His unit’s objective was to take a pillbox containing three machine guns at Goudberg Spur since the fortification blocked the line of advance. Taking a Lewis light machine gun, Barron worked his way around the flank of the German position. Alone, he opened fire at point-blank range and rushed the machine guns, killing four of the crew and capturing the remainder. Barron then turned one of the captured machine guns on retreating enemy troops, inflicting heavy casualties. His remarkable individual effort enabled his battalion to continue its advance.During the Second World War, Barron served with the Royal Regiment of Canada in Iceland and England. He died in Toronto, Ontario on 15 August 1958 and is buried in Prospect Cemetery, Section 7. 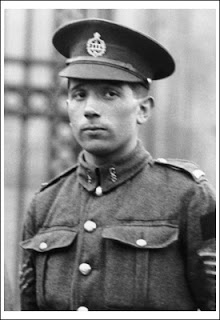 “For conspicuous bravery when in attack his unit was held up by three machine-guns. Corpl. Barron opened on them from a flank at point-blank range, rushed the enemy guns single-handed, killed four of the crew, and captured the remainder. He then, with remarkable initiative and skill, turned one of the captured guns on the retiring enemy, causing them severe casualties.
The remarkable dash and determination displayed by this N.C.O. in rushing the guns produced far-reaching results, and enabled the advance to be continued.”
(London Gazette, no.30471, 11 January 1918)

Much of the historical information in this post came from a booklet The Hertitage and Natural Features of Prospect Cemetery - A Walking Guide, Joan Miles & Pleasance Crawford. Photos from CWGC, Find-A-Grave, Al Lloyd, and Bob Richardson. I would be remiss not to mention the work of fellow CEF Study Group forum member Marika Pirie, who has photographed most of the WWI gravestones in Prospect Cemetery and where appropriate has submitted them to the Veteran Affairs Virtual Memorial database.
﻿
Posted by Bob at 12:01 PM