CANADIAN RAILWAYS AND WORLD WAR ONE

CANADIAN RAILWAYS AND WORLD WAR ONE

I thought I would for a change of pace that I would post on two of my favourite subjects this week, trains and World War One. 100 years ago, there were no automobiles or trucks to speak of, aviation was in it's infancy. The primary method of long distance movement was by ship and rail - usually separately but often in tandem.
So when we generally think of the war and railways, the moving of troops from across Canada to ocean ports and embarking on troop ships to England usually comes to mind. However Canadian railways were active and involved in many other activities other than moving troops. Our railways provided the manpower for the massive Canadian Railway Troops, over 19,000 strong, as well as the 750 strong Canadian Overseas  Railway Construction Corps. Railways moved munitions, foodstuffs, relief goods, military supplies, horses and mules, postal mail, locomotives and rolling stuff and a variety of other goods to Eastern ports for shipping to Europe. Railways operated during all seasons, in every type of weather. They transported and billeted troops, built and supplied arms and munitions, supplied, lent and sold ships, borrowed money and bonds ($100. million), and provided employment to others when the boys headed overseas.  In the case of disasters like the Halifax Explosion of December 6, 1917, a railway dispatcher for the Intercolonial Railway, Vince Coleman, stayed behind sending an urgent message to hold an incoming express train from St. John with 300 passengers, from arriving at the Port and thus saving hundreds of lives but taking his own life.The railway quickly mobilized aid, sending a dozen relief trains with fire and medical help from towns in Nova Scotia and New Brunswick on the day of the disaster, followed two days later by help from other parts of Canada and from the United States, most notably Boston. More than 2,000 lost their lives and many more were badly injured. So in a nutshell, trains were paramount to Canada's part in World War One. The war could not be fought without them.
In order to get an idea of the complexity and enormity of the involvement of Canadian railways in the war, in particular moving the over 600,000 men and women of the Canadian Expeditionary Force, we will start at the points of departure for Great Britain. The main gateways to the Atlantic in 1914 were the ports of Montreal, Quebec City, St. John and Halifax. That is not to say no other ports were used especially for troops, but these were the main destinations of the railways.

Up until mid 1915, the privately -owned Canadian Pacific Railway was the only transcontinental railway, finished in 1883, It operated a single line track east from across the Prairies to Winnipeg thence to Port Arthur maintaining a monopoly in the transport of wheat with high rates, shipping delays and shortage of box cars and the westward movement of immigrants. Operating from Vancouver to Montreal and ultimately St. John, New Brunswick the railway for years could call its own shots. The CP timetable in 1914 listed the fastest transit time for the 3 times weekly premier train Vancouver to Montreal as 85 hours. 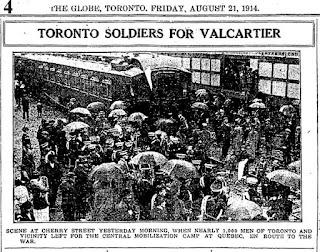 However, early in 1916, the Canadian Northern Railway Company, owned by native Canadians William Mackenzie and Donald Mann, commenced operations operating between Vancouver and Montreal later to Quebec City. At the end of 1915 it operated Canada's second transcontinental line with nearly 10,000 miles of track, starting out as a small pioneer railway in Manitoba in 1896. It rapidly acquired regional small lies so that it became a major operator by 1900 and had reached west to the Saskatchewan border. By that time a wave of expansion was sweeping the country, based on new Federal immigration policies followed in turn by a spectacular boom  in the West to which the Canadian Northern Railway contributed a considerable share of business. It encouraged settlers to go further north than ever before by opening up large areas of virgin land on the Great Plains, and gathering with its aforementioned feeder lines, the grain from the great farming districts which developed in the wake of railway construction. So by 1914 and the beginning of World War One it had given life and impetus to hundreds of small communities and shipping points. On its way westward from Edmonton, the Canadian Northern choose the more northerly Yellowknife Pass which was lower in altitude and easier to build than CPR's Kicking Horse Pass west of Calgary. In Ontario lines were built from Toronto via Belleville to Ottawa, and from Toronto via Parry Sound north to Sudbury, while at the same time tracks were laid east from Winnipeg to Port Arthur, Capreol and Ottawa. The fast expansion and its financing however could not be sustained.In 1913 the railway requested additional funding from the Federal Government and was denied due to a recession. A year later funds from the world's markets dried up with the threat of World War One. The flow of emigrants from Europe ceased temporarily, and so did the boom in West Canada. By 1918 the Canadian Northern Railway was bankrupt. It became a major part ot he Canadian National Railways in 1923. Major Western towns served were Winnipeg, Dauphin, Portage la Prairie, Prince Albert, Humbolt, North Battleford, Lloydminster, and Edmonton. 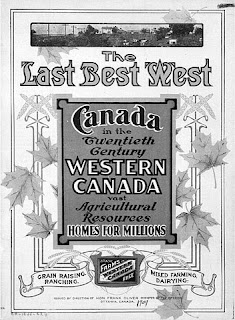 On May 1, 1915, Canadian Government Railways was formed by the Canadian Government to operate both the Intercolonial and the National Transcontinental Railway. On June 1, 1915, the National Transcontinental Railway owned by the Canadian Government opened between Moncton, Edmundston, Quebec and Winnipeg, Manitoba.  It connected with the Grand Truck owned Grand Trunk Pacific, running from Winnipeg though Edmonton, Jasper, and Prince George to Prince Rupert, British Columbia on the Pacific Coast. The Government had envisioned a network of grain elevators on  the prairies supplying trains to haul the grain to ocean ports in Quebec City and Halifax for export to world markets not realizing this a would be highly unprofitable and inoperable. The line between Moncton, Quebec City and Winnipeg was built as a "bridge line" to connect the Quebec City and Winnipeg by the shortest route. Therefore the line was built through north Quebec and across Northern Ontario. It maintained running rights on the Intercolonial Railway from Moncton to Halifax and St. John. A railway bridge was to cross the St. Lawrence River connecting Levis and Quebec City.The railway bisected the "clay belt" that extended from Barraute, Quebec to Cochrane Ontario.This soil and climate supported agriculture but the line was too far isolated to be attractive to settlement. However this line was supported by the then growing mining operations in the area. It connected with Southern Ontario with running rights over the Temiskaming and Northern Ontario to North Bay then to the parent Grand Truck into Toronto. Construction standards were extremely high along with the resultant expenses. Main Western Canada towns served were Winnipeg, Melville, Watrous, Saskatoon, Biggar, Regina, Yorkton, Edson and Edmonton. 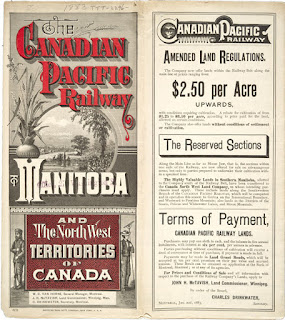 Fortunately serious mishaps involving Railways and Canadian troops were few and far between but there were a few. The Niagara Fall and Victoria Park Railway was one of the most colourful transportation companies in Canada. Operating from 1893 until 1932, it's electric cars met Lake Ontario excursion steamers at Queenston, ascended the Niagara Escapement loaded with tourists and troops distributing them at the Brock Monument to Niagara Falls and camps at Niagara on the Lake. On July 7, 1915 a car overloaded with about 200 tourists descended the 200 foot drop much too fast in the rain, losing its brakes rounding a curve ending up on its side split by a tree. The first rescuers on the scene were soldiers from the nearby 19th (Lincoln and Welland) Regiment and 98th Battalion. Soon they were followed by doctors from Camp Niagara. Eight people were killed, 95 hurt. The steamer Chippewa, docked at Queenston was transformed into a hospital ship returning the dead and injured to Toronto.
A Canadian Pacific fast express Chicago-Montreal train crashed into the rear of  a freight train on December 28, 1916 at St Polycarpe Juction outside of Ottawa. Five were killed and another five seriously. It is believed that this train was carrying troops. It blocked CP's main line for days at a crucial time in the war.
On December 31, 1918, a National Transcontinental train derailed at Glyndyne, Quebec. The train included three colonist cars of troops that had debarked from the SS Carmania in Halifax a day earlier. No details can be found on the mishap. Corporal William Stagg and Corporal George Smith were two of the homecoming several troops that lost their lives.
December 20, 1919 was the date of a severe train wreck that occurred two miles west of Onawa, Maine on Canadian Pacific's St. John-Montreal line. Although this train carried immigrant from the SS Empress of France landing St. John a day earlier, it was reported to be carrying a number of Canadian troops. Although two soldiers and a nurse are listed on the Veterans Affairs Canada Memorial, we cannot confirm that they were involved in the wreck. Certainly there would have been CEF injuries. A total of 21 were killed, 50 injured in this head on crash.

So in a nutshell, Canadian Railways were paramount in World War One. They supplied troops, technology, transportation, and employment. It would have been a very different war without our railways and their expertise.
Posted by Bob at 5:38 PM