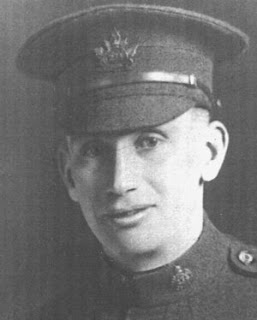 At first glance, Sydney Churchward's service in the Canadian Expeditionary Force seems no different from tens of thousands of others who left the United Kingdom for a new life in Canada. Sydney left Buckfastleigh, Devon, England about 1910 with two brothers and travelled to Toronto where he found employment as a machinist. He soon met and married Sadie, a native of Ballymena, Antrim, North Ireland. Sydney found steady employment as a policeman in the City of Toronto while the young family settled in at 236 Weston Road, Toronto. However by 1916, Sydney had seen his brothers and friends off to England to fight in the Great War. The pressure was overwhelming so on September 20, 1917, Syd left his comfortable position as one of Toronto's finest for a Privates position in the 234th (Peel) Battalion, recruiting in nearby Ravina Barracks. The 234th Battalion embarked for England from Halifax on the HMT Scandinavia April 18, 1917 arriving Liverpool April 29, 1917. Soon after arrival the 234th was absorbed by the 12th Reserve Battalion in East Sandling. After several months of training, Sydney Churchward found himself assigned to the 3rd (Toronto) Battalion as a reinforcement soldier in the field near Ypres arriving October 17, 1917. Two 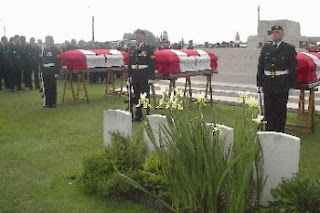 interesting items of note: first, one of Syd's witnesses on his military Form of Will was Sydney Francis Chaney, 123rd Battalion and a 2nd Regiment Queen's Own Rifles veteran whose younger brother, James Chaney had been an original 3rd Battalion recruit and survived the war until October 31, 1918 making him one of the last casualties of the 3rd Battalion. Second, Sydney Churchward's attestation paper very specifically mentions under distinctive marks that he had "3 gold teeth, one crown, and one open space on the upper jaw". This dental description of Sydney's congenital peculiarities is to become significant in later years. Private Sydney Churchward soon found himself thick in the horrific Battle of Passchendaele. On November 6, 1917, The Canadian Corps advanced on and took the village of Passchendaele after months of brutal attacks. The 3rd Battalion was to act in two capacities during the battle: first, it was to provide 10 platoons to capture the German strong points of V 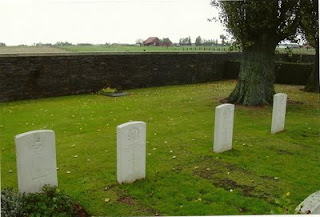 ine Cottage and Goudberg. This force was to consist of an assault party composed of Syd's "C" Company, two platoons of "A" Company with "D" Company in support. The second role for "B" Company was to support the 2nd Battalion in their effort to take the hamlet of Mosselmarktand the vital Vindictive Crossroads. 88 riflemen of the 3rd Battalion were killed in this action or would later die of wounds in the attack on Vine Cottage and nearby Goudberg. One soldier, Corporal Colin Barron was awarded a Victoria Cross for his brave actions in the taking of Vine Cottage. 20 men have known graves, 56 have nameless headstones with their names mentioned on the Menin Gate Memorial. Private Sydney Churchward #1024345 is one of the latter. However, here is where his biography gets interesting. In 2002, at the request of a local farmer, a group of Belgium enthusiasts called "The Diggers" exhumed the remains of three Canadian soldiers near Passchendaele. With the remains were identifying items linking them to the 3rd 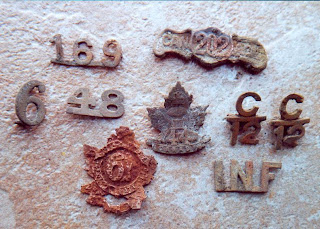 (Toronto) Battalion. Most importantly however, one of the skulls had three gold teeth and a gap on the upper jaw. The total story can be found here at THE DIGGERS Syd's journey is far from finished. In the meantime, the three soldier's remains have been re interred in Passchendaele New British Cemetery on June 9,2003. Sydney Churchward's name remains with the 252 from the 3rd Battalion on the Menin Gate Memorial out of a total of some 56,000. 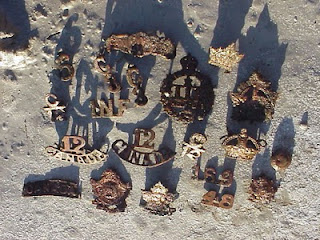 April, 2011 The story of the three re interred 3rd Battalion soldiers is not over. I personally suspected at the time that when the DNA testing was inconclusive and still the soldiers were given a military burial in Passchendaele New British Cemetery, the entire situation was somewhat rushed and more could have been done to identify one or more of the heroic men. Now it appears that others feel the same way. There are several ranking interested parties including Canadian Forces, Queen's Own Rifles Regiment, the Belgium "Diggers"and military enthusiasts such as myself that have started investigating other possibilities to the identity of the three soldiers. One main area of investigation is the finding of a large number of Canadian CEF hat badges, collar badges and identity badges in a leather pouch found on the "person" with the three gold teeth. Several of these badges were from 1st Contingent battalions possibly meaning that the man was a collector and that he was also a member of Canada's 1st Contingent joining in 1914. There was only two men of the 3rd Battalion soldiers lost on November 6, 1917 and one can probably be easily eliminated. More details are on the horizon. Stay tuned!

July, 2012 This week we were able, with the assistance of Ancestry.ca, to confirm some more biographical information on Sydney Churchward and his family; Sydney married Sadie Wilson in Toronto October 30, 1915. We believe Sadie was a Barnardo Home child. Sydney and Sadie had two children born in Toronto, Dorothy (1916) and Sydney (1917). Sadie and the two children returned to England in 1919 via Portland, Maine.

This week we were also contacted by relatives of Syd from the United Kingdom including a grandson. He confirms that he was never contacted for DNA testing. More to come..............

The inspiration for this story belongs to Adam Saunders, a Major in the 2nd Queen's Own Rifles of Canada Regiment and a Toronto Real Estate agent. Thanks to the story and photographs from "The Diggers" website. The photo of the three graves plus one was taken by myself in 2007 - situated next to the three unidentified soldiers is the grave of Lieutenant Gordon Alan Cockburn, Canadian Field Artillery who lost his life November 8, 1917 while in service with the Royal Flying Corps. Lt. Cockburn was a native of Toronto, living with his parents at 324 Spadina Road when he enlisted in Toronto with the 43rd Battery. Also to be found nearby in the Passchendaele New British Cemetery are the remains of Second Lieutenant Lorne S. Crowther, Royal Flying Corps, the younger brother of Major Beverly Crowther MC, 3rd Battalion, Killed in Action at Hill 60 May 3, 1917. Lt. Crowther was Killed in Action while flying with the 29th Squadron over Passchendaele September 20, 1917. The cemetery itself overlooks the ground of the 3rd Battalion's assault on Vine Cottage.
Posted by Bob at 4:31 PM
Labels: Pte. Sydney Churchward #1024345

Good Morning Bob
I read this and wondered if you had seen what Al Lloyd had done. Have a look! http://www.youtube.com/user/TwentyFirsters#p/u/11/b3sI6bxYB4s
Sarge

Love the story. Very interesting. My father, is the grandson of Sydney Churchward. His name is Sydney John Martyn Churchward.

My father Donald Petherbridge Arscott , a nephew of Sydney, was asked and did send a DNA sample to " someone". I remember him being excited about the contact. I am Pat Brown and have Sydney's picture in his uniform displayed in our home. I have twice been to The Menin Gate to commemorate and thank Sydney.

This is a great idea for any area of the house.Thanks for sharing the content on practical uses of name badge.

Hi Bob - My name is Steve Madill - and I understand Sydney to be my Great Grandmother's brother. It would be great to hear how this has turned out. My email is stevenmadill@gmail.com.