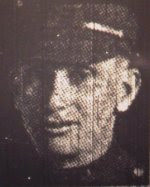 It has obviously been many weeks since my last blog. Our move to Milton, my back surgery and the every complexities of life have all contributed to my inability to contribute. That should start to change in coming weeks as the "dog days" of summer set in and I find myself with more free time.

I remain committed to profiling brave and heroic men who volunteered to fight for our Canadian freedom and for the motherland Britain. Some of my future blogs will profile men such as West Toronto Policeman and former Mimico resident, Sydney Churchward, who lost his life fighting in the 3rd (Toronto Regiment) Battalion during the Battle of Passendaele, November, 1917. Sydney is pictured above.

Others will include the 4 Dewhurst brothers, one of whom, Samuel Dewhurst was killed September 30, 1918 while fighting with the 3rd Battalion and is buried in Upton Wood Cemetery, France. Also the 4 Keating Brothers of Huntsville,ON distant relatives of my wife by birth, all of whom survived the war, including young (17 years) Howard Keating #4360, who spent 11 days with the Royal Canadian Dragoons. The remaining three Clearwater brothers, again great uncles of my wife, Lynn, all of whom served at the front and suffered terribly on returning home in one way or another.

We intend as well to profile men of the 23rd Battalion such as George Cubitt, Frank Richards, Daniel O'Brien, Leopold Lawless, Patrick Murphy and others who courageously stepped in as reinforcements for the 3rd, 4th, 13th, 14th, 15th, and PPCLI Battalions after these units suffered horrendously during the 2nd Battle of Ypres, April, 1915.

Here's wishing everyone has a great summer!

Cheers
Bob
Posted by Bob at 11:00 AM
Labels: FORTHCOMING BLOGS