Once again I must apologize for being negligent is the posting of my blogs. I have been preoccupied with our pending move to Milton and my surgery later this week. I have again posted the photograph received by my Grandfather, John Cody, from his friends in the 3rd Battalion whilst he was a Prisoner of War during the Great War. We have already blogged profiles on Messrs. Mote, Reeve, Lancey, Jack and Wiles. Please feel free to use our search option on the heading to review these profiles.

The next three friends of my Grandfather are CSM Francis Knight #9459; Sergeant John Newton # 426149 and CSM George Patrick (his friend from the 23rd Battalion)#63912 - they were all killed in action in chronological order in 1916. 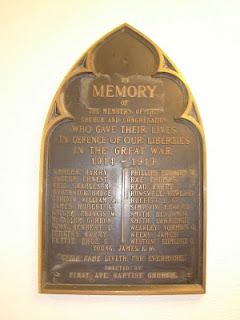 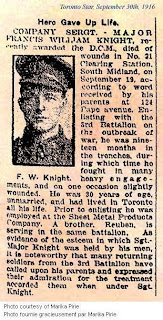 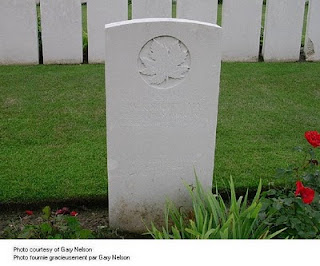 During the action at Mount Sorrel on June 13 1916, he went out under heavy machine gun and artillery fire, and brought in two wounded men. By his coolness, distinguished conduct and conspicuous bravery he inspired his men and kept them going" - R.O. 708. Awarded by General Byng, 22/07/1916; London Gazette 23/08/1916.

According to Gary Switzer, his award was an early one -- he was the fifth 3rd Battalion man to win the Military Medal and was one of 10 soldiers in the 3rd Battalion awarded Military Medals for their actions at Mount Sorrel in June, 1916 along with Major D.H.C. Mason receiving a Distinguished Service Order, Captains H. S Cooper, H.A. Chisholm and C.E. Cooper, Military Crosses, C.S.M. Harvey a Distinguished Conduct Medal and granted his commission.

Francis Knight was the Toronto-born son of Francis W and Julia Knight who resided at 124 Pape Avenue in Toronto's east end. Born in 1886 he listed no occupation or trade on his attestation papers signed at Valcatier on September 22, 1914. He did state however that he had served in the U.S. Navy. Perhaps this is why he got on well with my father, a former U.S. Marine Corps type. Frank and his younger brother, Reuben Knight #3042 were members of the 2nd Regiment Queen's Own Rifles. When the call went out in August 1914 for volunteers to the 1st Canadian Contingent, Francis went along with the draft from the Queen's Own forming the 3rd (Toronto) Battalion in Valcartier. Reuben was too young at this time but eventually saw overseas service in the Canadian Army Service Corps. Francis Knight started his military journey in the 3rd Battalion as a Private in "C" Company. When training on the Salisbury Plains, he was deprived of 1 days pay in Bustard Camp 21/11/1914 and again in January, 1915 was deprived of 8 days and 10 days pay, along with 8 days detention for being "Absent without Leave" on 2 different occasions. He travelled with the battalion to France in February, 1915 and fought unscathed through the Battles of 2nd Ypres in April, Festubert in May and Givenchy in June, 1915. He was promoted to the rank of full Sergeant in the field June 13, 1915 and to Company Sergeant Major ("B" Company?)June 7 and granted 9 days leave July 7, 1916. Francis received his Warrant Officer Class II June 12, 1916.

By September, 1916 the Canadian Corps and particularly the 3rd Battalion were resident in the Somme and involved in the Battle of Courcelette. From September 15 to the 17th, the 1st Canadian Division was in reserve while the 2nd and 3rd Divisions fought for the town and the main German trench positions around the town, the Sugar Factory (captured by the 21st Battalion)and aided by the Canadians first use of tanks. However on September 18, the 3rd Battalion was ordered to hold a trench position at St. Emile between the Sugar Factory and Courcelette. Francis was one of five 3rd Battalion men who were Killed in Action or Died of Wounds that day. The German onslaught of artillery, shrapnel shells, mortars and snipers was devastating on the men and the town.


Our own artillery firing very short causing us more casualties. CSM Knight wounded. About 50 casualties to date 30 of which have been from our own shell fire.

C.S.M. Francis William Knight is listed as Died of Wounds on 19/09/1916 at the 21st South Midland Casualty Clearing Station, France and is buried in France's Warloy-Baillon Communal Cemetery Extension.

Thanks to Gary E. Switzer for his help on this one. Credits for the photos as well taken from the Veteran's Affairs Canada Virtual web site. 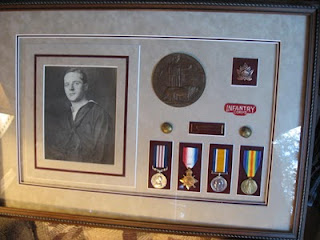 Since originally publishing this blog, I have been contacted by the great nephew of Francis W. Knight, Marshall Leslie of Toronto. Marshall has kindly provided me with photographs of the 1891 Canadian Census showing the Knight family, the World War One Memorial Plaque from First Ave. Baptist Church in Toronto with 21 names including the name of Francis W. Knight and a recent photograph of the family home at 124 Pape Avenue. Marshall was also kind enough to share some additional information on his great uncle and the Knight Family. Apparently there were 12 children in the Knight Family. Francis was the oldest male and the 4th of the 12 children. Marshall isn't sure of the present location of Francis Knight's medals including the 1914-15 Star, British War Medal, Victory Medal, Military Medal, Memorial Cross issued to the mother, and the Memorial Plaque and Scroll sent to Frank's father, Frank, Sr. Reuben, the younger brother did survive the war and although enlisting with the Canadian Army Service Corps, did serve for some time in the 3rd Battalion. He died in the U.S.A. about 1972.

***UPDATE December 5, 2010
Apparently the nephew and son of Frank Knight's youngest brother, Ralph, has Frank's medals in his possession including his Military Medal. They are in a safe and well caring home.

***UPDATE December 29, 2010
Ralph Knight, nephew of CSM Frank Knight, has kindly sent photographs of the medals, badges, buttons, insignia he has inherited and had mounted from his uncle including the Military Medal. A beautiful collection! Thank-you Ralph.
Posted by Bob at 11:08 AM
Labels: CSM FRANCIS KNIGHT #9459, MM

Frank Knight was my great Uncle - the eldest brother of my paternal grandmother. I appreciate the fact that you have shared this recollection, and will pass on the link.
- Marshall Leslie, Toronto.