Fulkerson being my biological late mother's maiden name, the fact that she was born and raised in Penticton, BC and that the surname Fulkerson is uncommon in Canada, unfortunately led me to some hasty conclusions. There are two brothers with the last name Fulkerson that served with the 54th (Kootenay) Battalion and both of whom lived in Penticton at the time of their attestation in the Canadian Expeditionary Force. At some point I assumed that these brothers were closely related to my mother with the evidence being almost overwhelming. Now, with my new subscription to Ancestry.com, I have to reluctantly admit that I may have jumped to conclusions prematurely and in fact there may be no direct relation between my mother and the brothers or if there is, it is generations old. The fact that they shared the same last name and called Pentiction their home, might be one large coincidence! 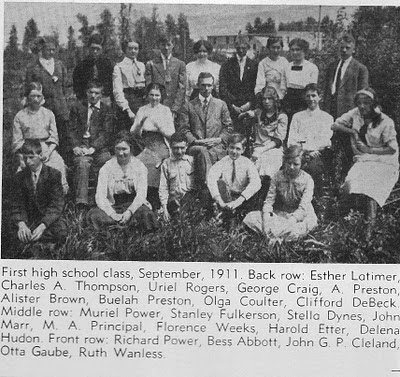 Stanley and Frederick Fulkerson were the younger sons of Quincy Silas and Perdetta (nee Vaughan) Fulkerson. Quincy, a lumberman and his young family were natives of Muskegon, Michigan - Casnovia and Sullivan Townships and emigrated to British Columbia, presumably in search of employment. They are shown in the 1900 U.S. Federal census in Casnovia and in the 1911 Canadian Census in Penticton. My mother's branch of the Fulkerson family came from Minnesota in the early 20th Century and are descended to the Reverend John W. Fulkerson, a distinguished Pastor in the United Brethren in Christ Church, from Marion, Minnesota. Both branches are direct descendants of Dirck Volckertszen, an early New World settler in about 1623 of New Amsterdam (present day New York) whose last name was Anglicized to FULKERSON.
﻿﻿
﻿﻿﻿﻿﻿﻿﻿﻿﻿﻿﻿﻿﻿﻿﻿﻿﻿﻿﻿﻿﻿﻿
Quincy and Perdetta quickly became active in Penticton after their arrival from Michigan. In 1911, they took over the Palace Hotel, built in 1906, on Main Street and operated it as a boarding house for regular long-term tenants. The "absence of a bar contributed to it being perceived as a nice place to stay". At one time it may have had as many as 10 rooms upstairs and narrow hallways. The Palace Hotel still exists in 2010 as Penticton's oldest commercial building currently operating as Audio Visions store. It now has a brick fronting from the photo above. Frederick and Stanley both attended the first school in the town. Stanley is shown in the photo of the first graduating class above and apparently was a gifted musician like his father, playing the trumpet and working as a chauffeur. He had impaired eyesight and presumably wore eyeglasses. Frederick joined the the local "H" company of the 102nd Rocky Mountain Rangers Regiment. When war was declared in August of 1914, many of the older boys and men of the town, particularly those of British background joined up with immediately with various units. Frederick however at the tender age of 16  being born February 13, 1898,was not permitted to sign up and remained in school with Stanley, who was a key member of the well-known Penticton Brass Band. 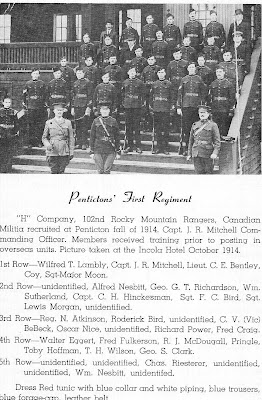 However on May 1st of 1915, the 54th Battalion was authorized by the Militia Department in Ottawa to recruit in the interior towns of British Columbia, with the Head Quarters in Vernon. The battalion assembled in June, 1915 with a 1st Reinforcing Draft consisting of 5 officers and 250 ranks being sent to England in July. By early September, young Frederick was permitted to join at age 17. The battalion, lacking a band, quickly accepted the offer of the Penticton Brass Band to be the official 54th Battalion Band and with that the members of the Pentiction Band were attested into the 54th Battalion en masse including older brother 18 year-old Stanley. Thus both brothers were with the Battalion and Band members when it sailed from Halifax on the S.S. Saxonia November 22, 1915. The battalion was directed to Bramshott Camp after arrival in Plymouth, for training and mobilization. The 54th Battalion was assigned to the 11th Brigade in the newly formed 4th Canadian Division. On August 13th, 1916, the Division was received their marching orders for France and by the last week of August were sharing the trenches near Dickenbusche with fellow brigade members 75th (Mississauga Horse) Battalion, 87th (Grenadier Guards) Battalion and the 102nd (North B.C.) Battalion. However by the second week of October the 4th Canadian Division was moved to Albert for their first serious battle in The Somme.

Frederick had received a short hospitalization in Witley Camp for the measles in February and was granted a 10 day furlough prior to the Battalion proceeding to France. Brother Stanley had been admitted to Connaught Hospital in June for VD but was discharged days before the Battalion left. We know from the service records that young Fred had been trained as a wirier and bomber in addition to his Band duties. Stanley was a Band member as well and probably functioned as a stretcher bearer when required.

﻿﻿
At the Somme, the first attack by the 4th Division was October 21st on Regina Trench. In the days following, all the battalions of the Division were intensely focused on the total destruction of the Regina Trench complex north of Courcelette. The battle was futile with the Germans well dug in, as they had been for the entire Battle of the Somme. After 41 days of attacking the trench and 500 metres along a 3.7 km front, the Canadians finally took Regina Trench with a monumental loss of life. However on November 18th the 4th Division, including the 54th Battalion, was ordered to capture Desire Trench, 200 yards north of present-day Adanac Cemetery. The attack by the Canadians went well - the British on each flank not so well. By day's end the men were forced to withdraw. Finally the British High Command ordered the end to the Somme Campaign and the last battle was over. This final day of the Battle of the Somme, November 18, 1918 had cost the Canadian 4th Division 1,250 men killed, wounded and missing including 18 year-old Private Frederick Fulkerson. His young body was never identified nor recovered from the Somme battlefield and was officially listed as "Missing in Action". His name is perpetuated on the Vimy Memorial. Interestingly, his medal card states that Frederick IS NOT eligible for the Victory Medal nor the British War Medal, presumably because he had not spent the required time in the field of battle. His mother did however receive the Silver Cross and Decoration and father, the Plaque and Scroll, of fallen soldiers. 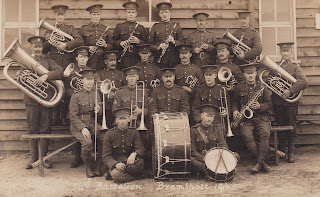 Stanley survived the battle and many more. He fought and remained with the 54th Battalion until the wars end with only a couple of short hospital visits including one for the mumps, receiving a Good Conduct Badge on July 7, 1917. The band of the 54th Battalion played at many events and functions, both during the war and after the Armistice was signed. Stanley Fulkerson would have played at many of them. He was treated in February, March, and May 1919 for Pneumonia and Influenza therefore was not able to return home with the few surviving original members (65) of the 54th Battalion. Stanley arrived in Halifax on July 8, 1919 and was officially discharged in Port Arthur, ON on July 12, 1919.

During the war, with the absence of her two boys, Perdetta Fulkerson was active with the Penticton Soldier Comforts Association. This organization raised funds and packed parcels of food, socks and clothing. A Christmas card was sent to every man each year. After Stanley's return home, the Fulkerson's sold the hotel and moved to California, to commence a new life without Frederick. Stanley Fulkerson died in Stockton, California in March 1970.

Thanks Norm Christie For King & Empire The Canadians On the Somme and to R. N Atkinson Penticton Pioneers.

This past week I successfully bid on EBay on the Victory Medal for Archibald Scott #463370, 54th Battalion. While not an original member of the 54th (joining the 62nd Battalion in Vernon, BC August 24, 1915) he was an early reinforcement to the battalion. However more importantly he was Killed in Action on November 18, 1916 in the same attack north of Courcelette that claimed the life of my Great Uncle Frederick. Like Private Fulkerson, his name is also perpetuated on the Vimy Memorial.
Posted by Bob at 8:38 AM
Labels: 54TH BATTALION, C.E.F., FULKERSON BROTHERS