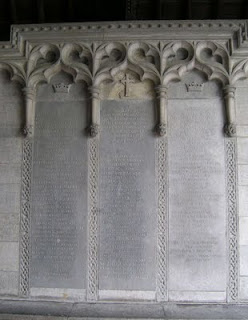 Continuing on with our valiant and heroic men whose names are on the World War One Memorial Plaque in St. Canice Cathedral, Kilkenny City, Co. Kilkenny, Ireland, I will detail these men by the chronological order in which they gave there lives for God and the King. Several,if not all of these men knew each other however none ended up in the same Battalion. Our next soldier is Private John Willoughby McClean #20795, 10th Canadian Battalion, Died of Wounds, April 23, 1915 near Ypres. John McClean is found in the 1901 Irish Census living with his uncle John Willoughby and his family at #1 James Street, Kilkenny City. The McClean name is common in the North, I think that perhaps John was originally a native of Belfast. The family appears to have all been jewellers and watchmakers - Kilkenny is noted for it's fine jewellery - John was working with his uncle as a "jeweller assistant". When recently in Kilkenny, my wife Lynn purchased a watch from a small jeweller shop on High Street. I wonder? Competition for jobs must have been intense for we find John McClean immigrating to Toronto, Canada April 2, 1906, along with our next Kilkenny casualty, Alexander Cantley on the SS Athenia. We don't hear from John again until he again immigrated into Canada March 27, 1911 on the SS Lake Manitoba this time heading for Alberta. I have not found a reason for his return to the U.K. nor have I found when he returned - possibly a serious family event? He enlisted in Valcartier September 25, 1914 with Alberta's 10th Battalion. John McClean therefore was an original with the 10th Battalion and lost his life on a rather infamous day in Canadian Military history. John McClean's remains are to be found in Poperinghe Old Military Cemetery outside of Ypres. Next we have Private Alexander Alfred Cantley #27049, 15th Battalion, Killed In Action on April 29, 1915. Alexander as previously mentioned probably was a friend of John McClean, born the same year, living on a nearby street in Kilkenny, attending the same church (strange because Alex was a Presbyterian) and originally travelled to Toronto on the same vessel in April 1906 along with Alexander's older brother, Robert. The Cantley family lived near the Kearney Castle, Blanchville Demesne south-east of the City of Kilkenny. Alexander found emp 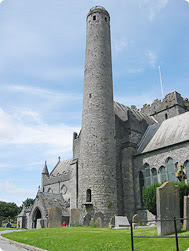 loyment as a prospector in Northern Ontario and joined the 97th Regiment (Algonquin Rifles). When the call went out from Ottawa in August 1914 for volunteers, Alexander was one of the 263 men from the 97th that were assigned to Toronto's 15th (48th Highlanders) Battalion in Valcartier. Brother Robert incidentally, married in 1908 and was employed as an Undertaker in Toronto, moving west by 1916 to Regina, SK with his family. Thus Alexander Cantley found himself on the front line on April 26 with the 15th. The previous day, the battalion had re-entered the line of trenches north of St.Jean in a field beside the main Poperinge-Ypres Road. The war diary claims that "the enemy was quiet" on April 29th with the battalion moving into a reserve position later in the day. The War Diary states that the battalion had suffered 639 in the past week. Alexander Cantley was Killed in Action on April 29 possibly by a sniper. His body was not retrieved on the withdrawal with "no record of burial" being recorded. His name is honoured on the Menin Gate Memorial in Ypres. History in Remembrance list from RBC (Royal Bank of Canada)
has a listing for John Hempenstall Kearney #25734, 14th Battalion, as follows:

The next man from the St.Canice Memorial Plaque was John Kearney. James was born in 1892 in Bangor, Co. Down, Ireland. His father, James, at the time was a constable in the Royal Irish Constabulary. In the 1901 Irish Census the family is found living on Grattan Street in Cork. Still later in the 1911 Census, father James has remarried, moved to #13 West Street, Kilkenny City and apparently retired from the R.I.C. employed as Clerk of Petty Sessions. John, at age 19, now is listed as a lodger in a residence in Carrickmacross town, Co. Monaghan working as a bank clerk. He must have been successful as he is shown as arriving in Quebec aboard the SS Corsican on September 25, 1913. As the page on the RBC website claims he started with the bank in Montreal on September 28 he would have applied for the position from Ireland and soon after joined the Canadian Grenadier Guards. The 14th Battalion was instrumental in a 3rd Brigade counter-attack the night of June2/3, 1916 on Maple Copse and Observatory Ridge positions. A comprehensive account can be found in the Battalion's War Diaries for those dates of the Battalion's brave attack on the German fortified line. Private John Kearney was listed as Missing in Action. He is one of the 72 names listed on the large wooden cross erected in the 3rd Brigade Cemetery in the area and one of 70 N.C.O.s and men killed on June 3. All these remains were later moved to a Special Collective Grave within the Railway Dugouts Burial Ground near Transport Farm Zillebeke. The actual grave locations are unknown therefore Private Kearney's name is honoured on the Menin Gate Memorial in Ypres.
Posted by Bob at 11:24 AM
Labels: ST. CANICE PART TWO