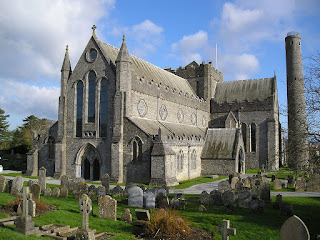 Several years ago, whilst pursuing my Cody family genealogy, wife Lynn and I found ourselves within the walls of the ancient and beautiful Cathedral Church of St. Canice, Kilkenny City, Ireland. http://www.stcanicescathedral.com Although still housing a Church of Ireland congregation the Cathedral is now apparently state owned and a National Landmark. Kilkenny is the ancestral home of my Cody Family with the family name prevalent in both Catholic and Protestant parish churches. While touring the interior of the church, we came across a Great War Memorial on a wall that at second look contained a section for Overseas Forces and specifically "Canadian Forces". There were six names inscribed presumably all former members of the parish and all had imigrated to Canada, enlisted in the Canadian Expeditionary Force and had perished in the Great War.

The names were: Pte. James C. Bannan; Pte. Alexander A. Cantley; Pte. John T. Jestin; Pte. John H. Kearney; Pte. John W. Mc Clean and Pte. Stephen Stone. It has only been in recent weeks that I have been able to order these men's Canadian service records and research their respective service in the C.E.F. as well as their families in Kilkenny. 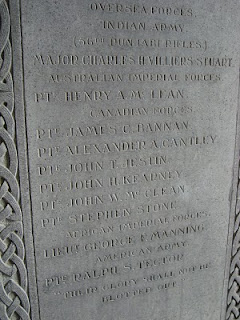 Private James Charles Bannan #79897, 31st (Alberta Regiment) Battalion was the son of Joseph and Mary Jane Bannan who in the 1901 Irish Census was living in a row house at 34 Kennyswell Street, Kilkenny which is only a couple of blocks from the Cathedral. Joseph was a former Sergeant in the Royal Irish Constabulary. Together Joseph and Mary had a least six children including boys Samuel, William Timothy, John and James Charles, all of whom immigrated to Western Canada at some point. James was the last to immigrate in March 1913 at the age of 19 on the S.S. Lake Manitoba joining brothers William, Samuel and John all whom had arrived in Medicine Hat, Alberta several years earlier and are found in the Canadian 1911 Census under the surname "Bannon". James however was the first to enlist, attesting November 18, 1914 in Medicine Hat into the 31st Battalion. He listed 3 years prior military experience with the South Irish Horse and his next of kin as father, Joseph, still residing in Kilkenny. James  followed to England with the 31st Battalion on the S.S. Northland May 29, 1915 with the Battalion being sent to France September 19, 1915. The only contrary notation on his service file was for being absent 24 hours July 19 to July 20 - he was docked 2 days pay. On November 6, 1915, the 31st Battalion were serving in the front line in Regent Street Dugouts, Kemmel, having taken over the line from the 28th Battalion that day. The War Diary for that day states "8 K - Heavy white frost. 11 K. Go over to Beaver Hat Overland. One man killed today - shot through the head. 2 sick sent to No. 6 field I Ambulance Dug-outs falling in". That man was Private James C. Bannan. He was interred in Kemmel Chateau Military Cemetery with full military honours. Private Bannan was entitled to receive the 1914-14 Star, the British War Medal and the Victory Medal which along with the Death Plaque and Scroll, were sent to his father, Joseph c/o James Green, Kilkenny, Ireland. His mother was sent a Memorial Cross. James's married, older brother William Timothy b. 1887, who had settled in Medicine Hat in 1906 with wife Edna, serving with the 21st Hussars militia enlisted June 24, 1916 in Medicine Hat's 175th Battalion as a lieutenant. This is the same battalion a previous blog subject of mine had also enlisted from in Medicine Hat, Lt. David Richmond, who also tragically died while fighting with the 31st Battalion in 1918. William received a Military Cross September 16, 1918 while serving with the 31st Battalion:

"For conspicuous gallantry and devotion to duty during a raid on
enemy defences, when he led his platoon with the greatest of courage and skill,
and destroyed several hostile posts, and inflicted heavy casualties. His
splendid example and good leadership throughout afforded great encouragement to
all ranks with him".

Captain William T. Bannan is shown as returning to Canada December 13, 1918 on the hospital ship HMAT Essequibo with multiple fractures. William went on to become a very prominent citizen in Medicine Hat. He continued to serve in the militia in a new re designated Alberta Regiment. Lt.-Col. William T. Bannan into the 1920's when he reorganized the Battalion Band into one of the country's finest military bands. Transferred to the Reserve List of officers in 1926. City Alderman (1922-29), Hospital Board member (1929-1933) and Secretary for the Medicine Hat Chamber of Commerce (1941). Died November 11, 1966 and is buried in Medicine Hat's Hillside Cemetery along with wife Edna (1956), daughter Edna (1982), sister-in-law Elizabeth? (1952), brother George Herbert (1938), brother John Herbert (1964), and brother Samuel George (1960).

A special thanks to CEF Study Group Forum member "censlenov" for his research on this family. Thanks Chris!


I should add that I have decided to delete my previous blog on Sgt John Gratton #63381 and the Gratton Family from Landkey, Devon. I was accused of using a person's photographs from the VAC Virtual site despite them being anonymous and using incorrect biographical information, by a non-blood related distant relative.

ST. CANICE SOLDIERS TO BE CONTINUED ANOTHER DAY!
Posted by Bob at 7:23 AM
Labels: IRELAND, KILKENNY, ST. CANICE CATHADRAL