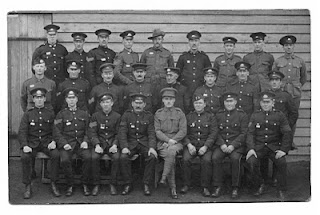 With our focus on surviving family members and those that are buried in the Western Front cemeteries from World War One, we sometimes forget the 3,835 Prisoners-of-War from the Canadian Expeditionary Force. My grandfather John Cody was one of those men captured by the Germans in Ploegstreert Woods, Belgium October 31,1915. Out of that total 286 of these soldiers were from the 3rd (Toronto Regiment) Battalion. This remains the second highest total by battalion following the 4th Canadian Mounted Rifles Battalion also from Central Ontario belonging to the 3rd Canadian Division.

Of the 286 men from the 3rd Battalion only 21 were not taken during the Second Battle of Ypres, April 22-May 25, 1915. This battle is noted as being the first poisonous gas attack in history and its results were shocking. The Canadian first division had been rushed in April 22 to bolster the line near the village of St. Julien trying to prevent the German Army from encircling them. Two counter-attacks by the Canadians on the 22nd and 23rd succeeded in stopping the German advance and closed the gap in the line. The following day, the Germans launched a gas attack directly on the Canadian positions and swept across the fields surrounding the village of St. Julien, trapping many Canadians including companies "C" and "D" of the 3rd Battalion who had been rushed up to the front from reserve. Virtually all the men from these two companies were killed, wounded and/or captured.

The majority of the remaining P.O.W.s from the 3rd Battalion were captured on October 8, 1916 during the battalion attempt to capture "the Quadrilateral" and Regina Trench during the Battle of the Somme. Remaining prisoners like my grandfather were captured in different situations throughout the war. 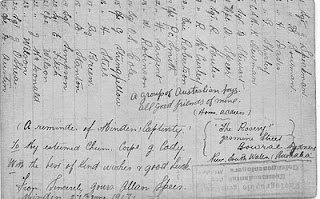 A number of prisoners that were captured were in fact also wounded with several 3rd Battalion POWs succumbing to their wounds while in captivity. Those that ended up in German work camps like Soltau with its infamous salt and coal mines were not so lucky. Fortunately because grandfather was a non-commissioned officer, he was not bound to perform hard labour. However he was constantly asked to work in the mines, he continued to refused and for that was punished and sent to "discipline camps". One of the items I inherited from my grandfather was this postcard he brought home after the war that he had been sent by a fellow prisoner in June 1917 From Minden Camp. An Australian corporal by the name of Allan Speer was obviously was a good friend to my grandfather. I believe the card was sent after John Cody was moved to another camp.

The card is signed "A reminder of Minden & captivity. To my esteemed chum Corpl. J. Cody. Sent with the best of wishes and good luck. From yours sincerely yours, Allan Speer. Minden June 27, 1917 , The Rosery, Jasmine Street, Bowrae, Sydney, New South Wales, Australia".

The postcard is a photograph of 24 Australian N.C.O.s all who were named on the reverse and who apparently were captured at various times and ended up in Minden Camp. With the advent of new web technology and digitalized archival data from various sources, we have been able to identify most of the men in the photo as well locate their Red Cross Prisoner of War files, their Australian attestation papers, Australian Army service files and embarkation information. Because I am forever getting contacted by surviving families from the subjects of previous blogs, I thought it might be worthwhile to publish the names and hope that relatives of the individuals might locate this blog and the photo of their family member. Many of these men were captured ( and a number wounded) at Fromelles, Somme on July 19 and 20, 1916. Their names are:
If you would like any further information on any of these men or can add more information on the few unidentified at this point, I would be pleased to hear from you. The service records for all these men are now available on-line at the National Archives of Australia - World War One soldiers here. They all returned to Australia at different times and presumably returned to civilian life with the scars of having been interred in Germany as well as any wounds they may have received in battle.
There are two fine books that have been written in the plight of Canadian Prisoners of War during World War One. They are:
SILENT BATTLE Canadian Prisoners of War in Germany 1914-1919, Desmond Morton, Lester Publishing, Toronto, 1992
GUESTS OF THE KAISER Prisoners-of-War of the Canadian Expeditionary Force 1915-1918, Edward H. Wigney, CEF Books, Ottawa, 2008
Both can be found at your local library or on http://www.abebooks.com/
I have been advised by member Leigh from the Great War Forum, that in fact most of he Australian Prisoners of War are from the Australian 5th Division, AIF and were captured at Fromelles, July 20, 1916. He also states that the "Bowrae" referred to by Allan Speer is actually Bowral, a picturesque town about 90 minutes south of Sydney.
As well Great War Forum member" frev" has identified No. 8 prisoner as Sgt. Robert James Mules, #415, 32nd Battalion, AIF and No. 22 prisoner as Cpl. John McDonald, #4278. Many thanks to both.

Dear Bob,
I was delighted to see the photograph on your blog of Australian POWs at Minden during WWI sent to your grandfather in Canada by Allan Speer.  I am almost finished a research project on the soldiers from the Southern Highlands of NSW, where Bowral is located.  Allan Speer is one of nearly 1200 local boys who enlisted from this area, along with his brother Cecil Herbert Speer.  I am particularly interested in the photo for another reason too.  Another brother, David Speer, was a well-known photographer in Bowral.  In nearby Berrima, about 8km away, there was an internment camp for WWI German POWs and David Speer took many pictures of the activities of the internees which he sold as postcards and put into a book of views. This has been digitised by the National Library of Australia: http://catalogue.nla.gov.au/Record/1968141?lookfor=author:(d.%20speer)%20{format:Book}&offset=3&max=15
It may well have been because of his brother’s capture in France and subsequent internment in Germany that he first became interested in photographing the Germans at work and play on the other side of the world.  Certainly Allan had written home to say that he was being treated well and was relatively happy.
Attached is a photo of Allan Speer – not very good, but enough I think  to identify him in your photo as middle row, 2nd from left.  According to articles which appeared in local papers, Allan Speer was captured on 20th July 1916 .
I wonder if you would be willing to send me high resolution scans of the front and back of your postcard?  I am archivist for our local historical society and it would be a fantastic addition to our collection if you would agree to donate a copy of the picture. We hold a very large and nationally significant  collection of images and artefacts relating to the POW camp in Berrima.
I am happy to send you some more biographical information if you are interested.  Your blog is terrific!
Hope to hear from you,
Linda Emery
Posted by Bob at 12:22 PM
Labels: 3RD BATTALION, PRISONERS OF WAR

My great grandfather is listed above. I googled his name and batillion and found your website. He was no older than 18/19 at the time.

Thanks for the blog, I appreciate your efforts.

Brilliant effort, am chasing a Gerald Green, 3rd Toronto, (who's mentioned in JC Thorn's book of his escape from germany POW camps including Holzminden..We are trying to find as many Canadian POW'S who were interred in Holzminden till 11/11/1918, I am going through london gazette, your archives, canadian great war project, I know about Intrepid, some pilots, ancestry trees...any hints or tip s greatfully received...

Anonymous, please leave your email here, I have information on Gerald Greene.

My name is Jenelle, I'm currently researching Holzminden pow's also the infamous Niemeyer. I have found with some help from New, Zealand, Canada as well some 361 pow's up to this date, you can email me at jmac2005@tpg.com.au
or Jacqui Cook at jcook@facesofholzminden.com
Thank you for your time.I don't have a URL..so I had to click anonymous.
Jenelle.

for the record, my grandfather, John Cody #63207,3rd Canadian Battalion, was never in Holtzminden Camp. He was in Minden - a big difference! Please remove him from your database for Holtzminden.

I am trying to trace details of my Grandfather who spoke before his death of being a soldier in the Royal Canadian Artillery in WW1. Little is known about Ernest (George) Hills born around 1890 and possibly one of the home children sent to Canada before 1912. He survived the war and is beleived to have been gassed at or near Vimy Ridge and later wounded (in the leg) and captured by the Germans. He was a member of the territorial army (home guard) in WW2 stationed outside London UK. I have drawn a complete blank on the limited info available to me and its only recently just before my mother passed away that info that he was a prisoner in WW1 has been mentioned in the family. Any help would be appreciated. Eric Hills Alfreton Derbyshire Unitied Kingdom. eric.hills@hotmail.com

I would like to find army details of my grandfather Thomas John Barber we know he was in the Canadian Army signed up in 1915 as we have his attestation paper. We heard through the family he ended up as a prisoner of war in Germany before he was released. We know he was in UK in 1937 as he got married that year but know very little of what happened to him from 1915 until 1937. I have looked at the various sites but can't find him in Germany. What do I do next. I would love his army records as he never spoke about the war to my mother and family and we all know so very little. Any information would be greatly appreciated.

Sorry folks, I will not reply to any "anonymous" postings.

I would like to find army details of my grandfather Thomas John Barber we know he was in the Canadian Army signed up in 1915 as we have his attestation paper. We heard through the family he ended up as a prisoner of war in Germany before he was released. We know he was in UK in 1937 as he got married that year but know very little of what happened to him from 1915 until 1937. I have looked at the various sites but can't find him in Germany. What do I do next. I would love his army records as he never spoke about the war to my mother and family and we all know so very little. Any information would be greatly appreciated.

From the book Guests of the Kaiser, Edward H. Wigney:

The Canadian service records are in the process of being freely digitalized and available later in the year. They will be found at the same on-line location where you obtained his attestation papers. His service record will detail all the camps he was held in. As well there is a website sponsored by the International Red Cross Prisoners of War where you can order the Red Cross records which might be more detailed. Other than waiting for his service records, you might want to try locating him on Ancestry.com focussing on Canada and the USA.

I have difficulty in finding everything this is fantastic the info you have given me could you keep an eye open for me and let me know when the records are freely digitalized, this would be amazing. Please contact me on nsbass@orangehome.co.uk