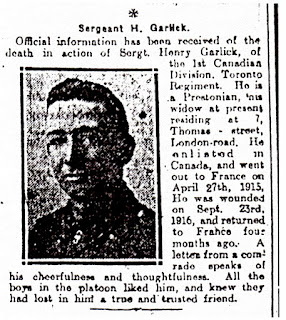 "The Toronto Regiment spent the first nine days of August, 1917 quietly out of the line at Les Brebis and Noux-les-Mines, but on the 10th moved into the trenches east of Lens to relieve the 14th (Royal Montreal Regiment) Battalion. Here a suspicious enemy patrolled No Man's Land more daringly than usual, a state of affairs The Toronto Regiment felt in honour bound to stop. By the time the Regiment was relieved by the 13th (Royal Highlanders of Canada The Black Watch) Battalion at 2:40 am on 14 August, the Germans had been chased out of the enemy territory between the lines. The night before the relief, in fact, Sergeant H. Garlick "D" Company, Lieutenant G.K. Holland, and Lieutenant N.A.Keys had all lead patrols up to the enemy's wire and had bombed one German patrol back to the trenches." Battle Royal, A History of the Royal Regiment of Canada 1862-1962, Major D.J. Goodspeed,CD Toronto, 1962

So survives the story of the subject of this blog, Henry Garlick. "Sergeant Garlick was awarded the Military Medal for Bravery in the Field for his actions in leading a Trench Patrol in "No Man's Land in the vicinity of Hill 70 on August 14th, 1917." He had enlisted from the 23rd Battalion in Montreal October 23, 1914 from a draft of the 1st Grenadier Guards of Canada 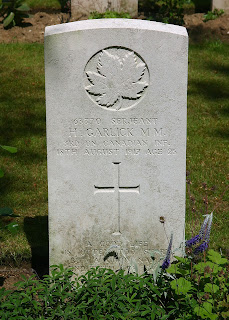 As so often happens in warfare, a heroic story often  turns  tragic and so it is with our Sergeant Garlick. Four days later during heavy German artillery bombardment Sergeant Garlick was Killed in Action at Hill 70 and is buried in Bully-Grenay Communal Cemetery British Extension, Pas de Calais, France. Aged 25. Son of William and Rose Hannah Garlick, Preston, Lancastershire, husband of Selina Jane Garlick, 77 Meadow Street, Preston. Henry Garlick had previously received a gunshot wound while fighting in the Somme at Courcelette September 23, 1916.
I am proud to possess Sergeant Henry Garlick's Military Medal. It was previously owned by fellow enthusiasts David Bluestein and Gary Switzer. Thanks to both of them for their assistance. Gary has professionally mounted the medal in a framed enclosure. It would be great for the Military Medal to be reunited with his trio (British War medal, 1914-15 Star and Victory Medal) and possibly a Memorial Scroll, Plaque and Silver Crosses. 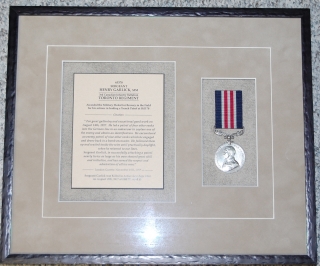 Henry Garlick had a cousin who was also Killed in Action in the Great War. Private John Garlick #3283, The King's (Liverpool Regiment)/ 8th Battalion, aged 18,  was serving at the Somme the same time as his cousin Henry Garlick and was listed as missing August 2, 1916. His name is perpetuated on the Thiepval Memorial. Soldiers from the 3rd Battalion Killed in Action and buried alongside Sergeant Garlick were: Private Joseph Savage #785048; Private William Kelly #138464; Lance Corporal Herbert Francis #767146; and Private George Laidlaw #788577. Privates John Wignall #757221 (Fosse No.10 Communal Cemetery) and Private Archibald Morris (Vimy Memorial) from the 3rd Battalion were killed that same day as well. As the hours draw near to the 93rd. anniversary of the Armistice November 11, 1918 our wish is that Sergeant Henry Garlick and all the others lying in distant cemeteries. Rest In Peace and thank-you.
Posted by Bob at 9:04 AM

Hi I'm a Volunteer researcher with the "St. Marys' Project" part of "Preston Remembers" with the Museum of Lancashire. Part of the Museum is housed in St. Marys' Church and there's a War Memorial with 80 names on it. The project is to find the stories of all 80 men who gave their lives. One of my names is Henry Garlick!! I'd searched and searched and couldnt find him on Preston records at all after the 1901 census. Then last night just as i was going to bed i thought, "why not google him!" Now picture me hopping round the bed with glee when i came across the link for this website!! Hallelujah!! My husband thinks i've lost the plot!!
Would you mind if a print out this page with all Henry's details on? Summer of 2015 we are having an exhibition in the Museum to remember the 80 and to have this link and information would be great.
Ive traced his family tree back to 1790 if you are interested i can email it to you. St. Mary's Church was the family Church for many years.
Do you know why Henry left Preston to go to Montreal and did i read correctly that he enlisted in Montreal? Now we just need to find the rest of his medals!! Any information you have on Henry would be very gratefully recieved and Thank you very much for being a custodian of him!
Sarah Yates

I received your email message and will reply separate from this message. I will cooperate with you to the best of my ability.

Please note that the Canadian World War One entire service file for Henry Garlick can be freely found on-line at the Library and Archives Canada Soldiers of World War website as a downloadable PDF file. April 27, 2014