FAMILY KIN OF LYNN AND BOB WHO SERVED IN THE C.E.F.

As the hours grow closer to our November 11, 2014 Remembrance Day I believe it is time to again remember the young men of our families who enlisted and fought in lands far away in someone else's war and whom returned to live with memories and wounds for their remaining years.

Of the eight soldiers with the surname "Clearwater" listed on Library and Archives Canada's website Soldiers of World War One, Wife Lynn is directly related to five and indirectly related to the remaining three. The two Canadian Clearwaters listed on the Commonwealth War Graves Commission website are brothers, distant cousins to Lynn and have been the subject of previous blogs. All these direct relations were born in or near Huntsville, Ontario.

I have also previously blogged on the life and military service of Lynn's grandfather, Lance Corporal Martin Herbert (Bert) Clearwater #201562 who served in the 1st (Western Ontario) Battalion and who was gassed while fighting with his unit in the Battle of Passchendaele, November 1917. Bert tragically lived a shortened life due to the complications from the gassing. He passed March 23, 1934 at the age of 51 years. 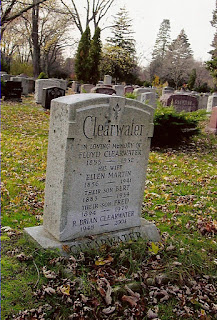 Private Fred Clearwater #408607, Lynn's great uncle, attested to the Northern Ontario 37th Battalion September 15, 1915 in Camp Niagara at the age of 19. He was transferred to Alberta's 31st Battalion August 6, 1916. Weeks later at the Somme, he received a shell wound to the back. Again November 6, 1917 at Passchandaele, like his brother Bert, Fred was wounded receiving a bullet wound to his foot. He was demobilized March 27, 1919 in Toronto having received a Good Conduit badge in the field. He died January 24, 1979 unmarried and is buried in Park Lawn Cemetery, his grave marked by a small flat marker.

Private Gordon Leroy (Roy) Clearwater #451198 another great uncle attested August 27, 1915 again at Camp Niagara directly into Toronto's 58th Battalion at the age of 17. He proceeded with the battalion to France February 20, 1916. He served valiantly in the all the Canadian Corps's battles unscathed and was awarded the Good Conduit badge in the field August 5, 1917. Demobilized in Toronto April 9, 1919 and died November 11, 1969. He is buried in Huntsville's Hutcheson Memorial Cemetery in a grave with his second wife, Vera Rhiness. 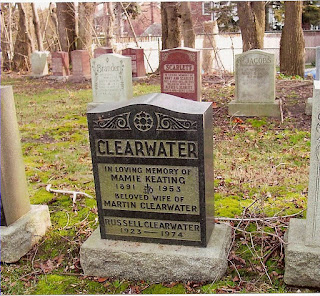 Again, I have previously blogged on the lives of Private Robert Clinton Clearwater #115065, who died of TB July 2, 1921 and his younger brother Flight Lieutenant Roy Clearwater, 12 Squadron, RAF killed over Duisberg, Germany October 14, 1944 while piloting his Lancaster bomber during "operation Hurricane". 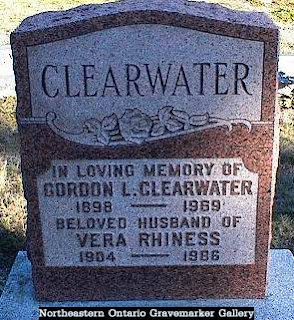 Brothers of Lynn's grandmother, Mamie Keating, a Huntsville native were: Private John (Jack) Keating #763574 attested into the 122nd Battalion April 17, 1916 in Huntsville, a veteran of 3 years in the 23rd Northern Pioneers militia, released as medically unfit August 18, 1918 at Camp Borden; Private James Keating #763571 attested into the 122nd Battalion April 17, 1916, served with the Canadian forestry Corps in Britain and France, discharged Toronto May 27, 1919; Trooper Howard Keating #4360 attested into the Royal Canadian Dragoons January 9, 1917 at the age of sixteen, discharged as underage January 31, 1917; Private Trueman Keating #408479 attested in the 37th Battalion June 4, 1915 Camp Niagara, transferred to the 42nd Battalion in the field suffering an eye injury from shell explosion June 1916 Ypres area, transferred to the YMCA and 4th CRT before discharging in Toronto April 16, 1918 as physically unfit. Died November 6, 1934.

Of course, the subject of a previous blog was Lynn's great uncle and the uncle to her late father Bill Alexander, brother of Grandfather Aaron, named after Farrier Sergeant William Alexander #104, 13th Light Horse Regiment, Australian Imperial Force. William Alexander succumbed to tuberculosis on a hospital ship returning to Australia December 17, 1917. He was a native of Lisglennon, Co. Mayo, Ireland and had previously served in Gallipoli, Egypt and the Western Front.

Further family members to serve include Private Herbert John Tuffrey #781521 (serving under the alias Herbert Bartlett) a cousin to my grandmother Alice Cody (nee Tuffrey) who was killed in action September 2, 1918 while serving with the 46th Battalion, a native of Bletchingdon, Oxfordshire, and who is buried in the Faubourg D' Amiens Cemetery in France. His younger brother Leonard Tuffrey #341246  attested into the 70th Battery, CFA April 19, 1917 but whom was soon classed as C-1 with poor eyesight and finished the war in Toronto serving with No. 2 CAMC being promoted to rank of Sergeant.

Of course there are also the Fulkerson brothers, Private Stanley Fulkerson #443548 and Private Frederick Fulkerson #443427, residents of Penticton whom I believe were related to my mother, Yvonne Fulkerson. Both attested to and went overseas with the 54th (Kootenay) Battalion. 20 year old Stanley served in the band as a stretcher bearer surviving the war. However younger brother Frederick, 18 years old not so lucky being Killed in Action the last day of the Battle of the Somme, November 18, 1916. His name is perpetuated on the Vimy Memorial in France.

Must do a blog someday on all family members who served in the Second World War. On second thought that will probably take several blogs. Amazing!

hi im looking for more info of john howard keating and john jack keating.
any info would be greatly appreciated
my e-mail is natasha_pike@hotmail.com