One of the soldiers found on the Halifax Memorial addenda tablet (an add-on panel to the Memorial added in the 1980's) while researching Private Adam Sandy was Private Bertie Nackogie. Unlike Private Sandy, Bertie Nackogie was not a victim of the Halifax Explosion in 1917. Rather he was diagnosed with pneumonia while training with the 228th (Northern Fusiliers) Battalion in Camp Borden prior to the battalion departing for England February 16, 1917.

Bertie Nackogie was a 24 year-old aboriginal Ojibwa Indian who called Moose Factory home but was born in the small native settlement of  New Post, Ontario, Taykwa Tagamou Nation, close to Cochrane and present day site of a controversial hydro power generating project. He listed his occupation as "guide and hunter" on his attestation paper signed July 20, 1916 while listing his next of kin as his aunt Annie Sedlion. At that time Dr. A. Wills, the acting Medical Officer for the 228th Battalion considered Bertie "fit for the Canadian Over-Seas Expeditionary Force". He again passed medical inspection September 27, 1916 at Camp Borden as the Medical History Sheet in his service file has an entry as "passed" again signed by Captain Dr. A. Wills, Medical Officer. However his Proceedings on Discharge Certificate dated December 26, 1916 and found in his service file signed by Lieut.-Colonel Archibald Earchman never signed by Bertie Nackogie, rather was noted as "the above named-man is discharged in consequence of deceased at Base hospital". His conduct and character were described as "good". 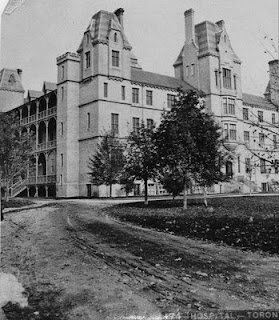 There are no medical sheets or information in his service file. Only a medals' card (Nackogie received no medals as he served in Canada only), standard soldier's ID Rolodex cards, Last Pay Certificate (showing a balance of $60.45 owing to the soldier) and a Casualty Card with the last inscription reading " Died in Hospital, December 26, 1916 - D.O. 270 - 29-12-16". We know now that Bertie Nackogie contracted pneumonia at some point and was admitted to "Base Hospital" Toronto which in fact is believed to be the old Toronto General Hospital located then at 400 Gerrard Street East, Toronto. 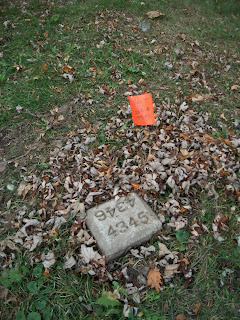 Fellow CEF Study Group Forum member Marika Pirie  located a Toronto Star newspaper clipping dated December 27, 1916 and posted it to Nackogie's page on the Veteran Affairs Canada website Canadian Virtual War Memorial. The article describes his burial within Toronto's Prospect Cemetery due to  "the difficulty of transportation by dog train" to his home in Moose Factory. Therefore Private Nackogie does indeed have a known grave - his name should not have been added to the Halifax Memorial, a Memorial that includes the names of men of the Canadian Army stationed in Canada who have no known graves. A simple phone call to Prospect Cemetery confirmed that indeed he was buried in Section 17, Plot 43-46. They stated that no grave stone had ever been erected and a recent visit confirmed this fact.

Believing that the Last Post Fund might take the initiative to install a grave stone I first contacted them, with a copy to Veteran Affairs - their reply was that they would certainly get involved if no other parties were forthcoming. However I also received replies from Peter Mill, Director, Canada Remembers, Veteran Affairs Canada, who in return had copied Gerald Meyer, CD, Inspecting Officer (Works), Commonwealth War Graves Commission (Ottawa) as well as receiving a message from Dominique Boulais, Deputy Secretary-General, Canadian Agency, Commonwealth War Graves Commission. All thanked me for my involvement and confirmed that CWGC were responsible for ensuring that Private Bertie Nackogie has a proper and fit grave marker and that steps will be taken to ensure that one will be installed at his grave location within Toronto's Prospect Cemetery. Gerry also promised to keep me advised of their progress and to notify me when the installation date at the cemetery is established. He also updated me of the progress on locating graves of other Aboriginal names listed on the Halifax Memorial addenda tablet and in which I am interested. Future blogs to follow.

Bertie Nackogie is listed on both a listing of Native Veterans First World War Treaty #9, an on-line list of soldiers that served from the Nishnawbe-Aski Nation (Treaty #9) area in Northern Ontario as well as the nation-wide Aboriginal Veterans Tribute. I have tried to contact the current Chief of the Moose Factory Reserve to inform him of the current status and the probability of a gravestone installation in the Spring but at this time I have not heard back.
A couple of further notes. The 228th Battalion gained some notoriety as they established an ice hockey team, which played in the 1916-17 NHA season. The team playing in military uniforms proved very popular, and was third in league standings with a 6-4 record when they dropped out of the league when leaving for overseas in February, 1917. A scandal arose when hockey stars Eddie Oatman and Gordon Meeking were discharged, both subsequently claiming that they had been paid bonuses and promised commissions in the Battalion to play hockey for the 228th. On arrival in England, the 228th Battalion were renamed the 6th Battalion, Canadian Railway Troops. Their Commanding Officer was the same Lieut.-Colonel Archibald Earchman, the man that signed Bertie's discharge papers.

With the lack of success in contacting relatives of Bertie Nackogie and after trying to contact First Nation Cree communities in New Post, Moose Factory and Moosonee, I decided to revisit his service file. Because Bertie had signed his attestation papers with an "X" my assumption is that Bertie was illiterate. Therefore his papers would have been completed by a recruiting clerk with the 228th Overseas Battalion in Moose Factory. We all know of names on these records that have been bungled and misspelled. If this was the case with Bertie, is it possible his name was actually Nakogee?

That is a popular Cree surname, still found in the James Bay Cree communities. The town of Attawapiskat that has been infamously mentioned in the news recently has it's school named after a Nakogee family member. There are something like close to 40 family members to be found in the White Pages for Ontario. With this new information I am again contacting the Chief of the Cree Moose Factory, Norm Hardisty, for his assistance in locating relatives. As well I copied Veterans Affairs Canada and the CWGC with this possible new insight.

We have also noted that the Veterans Affairs Canada Virtual Memorial database has amended the listing for Private Bertie Nackogie to show that he is in fact buried within Toronto's Prospect Cemetery. Commonwealth War Graves Commission still have not amended their database as of this date.

Hopefully, more to come....
I would like to acknowledge the assistance of Marika Pirie, who without posting the Toronto Star article (and thousands of other photo and newspaper clippings for other soldiers) locating Nackogie's final resting location would not be possible. As well thanks to Wikipedia, the free encyclopedia for information on the 228th Battalion.

Thanks to John Long, Nipissing University, North Bay, ON we have received further information on Bertie's background as follows:

"Bertie's father (George) died in 1885, when Bertie was about 3 years of age. His mother (Isabelle, nee surname Michel) died about 1908. Bertie apparently had no siblings. His father was Cree, his mother Anishinaabe (Algonquin or Ojibwa). After his father died, Bertie was probably raised Anishinaabe - although Cree was probably his second language and he would have been told of his paternal lineage".

We have now had the opportunity to visit Moose Factory and learn more about the culture and environment from which Bertie Nakogee came. This will be described in a future blog. As well we recently heard from Commonwealth War Graves Commission to state that their budget for this year has been expended however a replacement headstone for Private Nakogee's grave with the correct family spelling has high priority and will be included in the budget for next year.
Posted by Bob at 9:26 AM
Labels: PRIVATE BERTIE NACKOGIE

How about putting Marika Pirie up for the Order of Canada ?
People looking up family losses on the VWM are indebted to individuals like her and such as photographer Gary Nelson who post images on our kin's files that we ourselves can't capture.
It would do GG David Johnston good to be able to induct someone for volunteer work on the individual memorializing project for which he is ex-officio patron. Neither of his predecessors ever mentioned this stewardship that I recall, despite the many photo opps in a War Dead context.