When my daughter, Beverly, who lives in Lincolnshire, U.K. recently sent me a hard-to-find magazine in North America, Britain At War, little did I know it would lead to this blog. For one of the feature articles was titled An East Africa Victoria Cross. When I started to read the article, it reminded that I had a set of medals in my collection that required further research and attributed to a veteran of the Royal Fusiliers who served in East Africa. I wonder....

Corporal Samuel Richard Yule was born in London, England June 11, 1881 and had emigrated with wife, Margaret Ellen, an Oxfordshire native whom he had married in 1909, to Toronto on the S.S. Megantic April 22, 1911. They are shown on the 1911 UK Census as living at 78 Portobello Road, Notting Hill, London with Samuel employed as a "vacuum cleaner".  After arriving in Canada, they also show up on the 1911 Canada Census as both being employed as servants and residing in the Grand Union Hotel, 174 Front Street, Toronto. According to his C.E.F. service record, at the time he enlisted August, 1914 into the 3rd (Toronto Regiment) Battalion, he was working as a waiter and in the prestigious Globe Hotel in Collingwood, Ontario and a member of the 2nd Regiment Queen's Own Rifles militia. Samuel's attestation paper shows he served 12 years in the UK with the Royal West Kent Regiment this being confirmed by the Queen's South African Medal with five date clasps in the medal set. Little is known of his West Kent and Boer War service other than he received a gun shot wound from a "pom-pom" in the right hip and was "dragged along in a saddle suffering a knee contusion". He also served overseas other than in South Africa, possibly in India. Private Yule accompanied the 3rd Battalion to England as a Batsman in the Battalion's base company and was with the 3rd Battalion during the winter of 1914-15 while the unit was training on the Salisbury Plain. Private Yule was solicited  by the London Branch of the Legion of Frontiersmen to join the now-forming up of the 25th (Frontiersmen) Service Battalion, Royal Fusiliers (City of London Regiment). My research suggests strongly that this was negotiated with the knowledge of the officers in the 3rd Battalion with the result that Private Yule was granted an Honourable Discharge January 30, 1915, by paragraph 392 (XXV) King's Regulations which reads "Cause of discharge: His services no longer required". His military character was described as "Good - but physically unfit for military service". This comment may have been made based on his height which was shown to be 5' 4 1/2" on his attestation paper however other documents claim him as 5' 3" - not inductive to creating a great infantry soldier, certainly not in the 3rd Battalion who were known to be physically selective. For his service in England with the 3rd Battalion, C.E.F. he was given a British War Medal inscribed correctly with his 3rd Battalion information 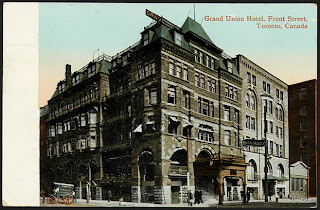 through their training in Bustard Camp, Salisbury Plains from October, November 1914, and January 1915. However January 18, Samuel was granted 8 days leave. His service record notes on January 30 "Deprived 13 days pay. Absent without leave. Breaking camp remaining absent without leave. Overstaying pass 8 days". At some point, wife Margaret followed him back to England. (however she returned to Canada August 1, 1916 on the S.S. Corinthian as a returning Canadian with a destination of Collingwood and presumably resuming employment at the Globe Hotel).  A previous owner of my medal set made the observation "that he was a deserter" and indeed one of the documents in the service file uses this word.

According to his British service record Private Yule enlisted February 13, 1915 in the 25th Service  (Frontiersmen) Battalion, Royal Fusiliers (City of London) with the original service number 12833, presumably the 33rd man enlisted. The stories of  25th (Frontiersmen) Battalion, affectionately known as "Driscoll's Scout's"  in German East Africa are legendary and possibly the subject of a future blog. They were recruited and lead by their commanding officer, Lt. Col. Daniel Patrick Driscoll, C.M.G., D.S.O. who also happened to be the Commandant General of the world-wide movement Legion of the Frontiersmen. He "wanted a mixture of the irregular Scout guerrillas of the Boer War and Commandos. His full biography can be found on-line HERE.The age limit was 25-48 years, but soldiers up to 65 years actually were on the roster". Included were famous African hunters F.C. Selous (64 years old), Martin Ryan, George Outram and Jock Richardson as well as noted African wild life photographer Cherry Kearton. Other members were a British millionaire, American cowboys, a Scottish light-house keeper, a naturalist, a circus clown, an Arctic explorer, an opera singer and a lion tamer. Also of note was the fact that the 25th, Royal Fusiliers were the only Battalion of the British Expeditionary Force to embark and enter the field without training. Although I have not been able to locate a Nominal Roll for the unit (apparently none exists at National Archives, Kew) however I think that perhaps some of the Legion of Frontiersmen that travelled from Saskatchewan August 1914 on the same train as the PPCLI recruits may have ultimately made the rooster of the 25th Battalion. They sailed from London on the S.S. Neuralia, arriving in Mombasa, Kenya May 6, 1915.

From here on his service record is sparse. Private Yule was treated for malaria and enlarged spleen in August 1915 in hospitals in Nairobi and Cape Town. Presumably he fought in most of the 25th Battalion battles which are outlined on various on-line sites, books and in the article in the May 2012 issue of Britain At War chasing the German Army across East African. This may have included the actions September 3, 1915 at Maktau from which 2nd Lieutenant Wilbur Dartnell was awarded his Victoria Cross. Private Yule was invalided to Cape Town in 1916 after having 20 relapses of malaria. When the Germans had been removed from East African in August 1917, the 25th Battalion was dissolved with members being sent to other units. Subsequently Private Yule served for short periods with the Leinster and Royal Munster Regiments, returned to the U.K. September 1917 before being assigned April, 1918 to the Gloucester Regiment with service number 55101. On July, 1918 he was sent to Royal Defence Corps 267 Company. He received his U.K. discharge March, 1919. "entitled to wear nil wound stripes and two blue chevrons with a very good character". Next of kin was shown as Margaret Yule, 294 South Lambeth Road, London, who must have lived there during the war before her return to Canada in 1916. Samuel Yule was repatriated (assuming at the expense of the British Army) back to Canada on the S.S. Toloa March 9, 1919. For his service with the B.E.F. he was sent a British War Medal, Victory Medal and 1914-1915 Star all correctly inscribed with the information from the Royal Fusiliers. He received a small (20%) pension for 26 weeks due to his bout with malaria. It should be note that according to Ewart Grogan, South African explorer, author and Frontiersmen, in his book Lost Lion of the Empire describes the 25th Battalion as follows; "nineteen months after it's arrival only 60 of the original 1166 Frontiersmen were left alive". Private Samuel Richard Yule was one of those few lucky 60! However his military story does not end here. A full description of the Legion of the Frontiersmen and the 25th (Frontiersmen) Battalion, Royal Fusiliers can be found HERE.
Samuel Richard Yule re-enlisted once again in the C.E.F. May 3, 1919 as Private Yule #2607021 Canadian Army Medical Corps, #2 Depot (Toronto), category B2, listing his address and that of Margaret as 176 King Street, Toronto. On June 3, 1919, he was promoted to Provisional Corporal, with that rank being confirmed as Corporal a short time later. At some point, he received treatment to his right leg from "falling out of an ambulance". May 8, 1920 he was posted to the Dominion Orthopedic Hospital, Christie Street, Toronto and finally demobilized with a final discharge October 31, 1920 at the age of 40. A great souvenir of this hospital exists on-line HERE.Corporal Yule can probably be found in one of the many photographs of the staff found in this illustrated booklet. At this point I can find absolutely no further information on either Samuel Yule or his wife, Margaret. They had no children that I am aware of and presumably continued employed in the hotel industry as waiters.

Since the publishing of this blog, fellow C.E.F. Study Group Forum member, friend and super sleuth, Annette Fulford, has been able to provide more biographical information on Samuel Yule and his service. Most principally, she has found his Boer War service record which provides a wealth of information. Samuel Yule enlisted showing his height as 5' 3 1/2" tall weighing 116 pounds. With a service number of 5923, Samuel served 12 years with the Royal West Kent Regiment, from attesting in London May 17, 1900 in London until his final discharge May 16, 1912 (whilst in Canada). As well as serving over 2 years in South Africa, he was posted to Hong Kong and Singapore respectively over 3 years. The last 4 years of his service were spent in the "First Class of the Army Reserve" thus allowing he and his wife to emigrate to Canada prior to his release. He married Margaret Helen Elizabeth Wilkins, spinster, July 3, 1909 in Calne, Wiltshire (an Army base). His mother was Olivia Yule, 20 Farriday Road, Tabrooke Grove, London 15. He had an older brother, Alfred H. Yule (b.1880) whose medal card I located in National Archives, served in the Middlesex Regiment, December 27, 1914 until demobilization, entitled to the 1915 Star, British War Medal and Victory Medal.

As well, Annette located the family in the 1881 Census (prior to Samuel's birth) living in Lambeth with father Samuel H. Yule employed as a "commercial traveller". The family could not be found in the 1891 Census but in the 1901 Census mother Olivia is listed as a widow, with Samuel H. dying December 1890 in the District of St. Olave, London. Wife Margaret's death was located by Annette in the British Columbia Archives as occurring May 3, 1971 at the age of 85, in Victoria, B.C. We haven't located Samuel Richard's date as yet.  Thanks for everything, Annette.
Posted by Bob at 2:42 PM
Labels: Corporal Samuel R. Yule #9640