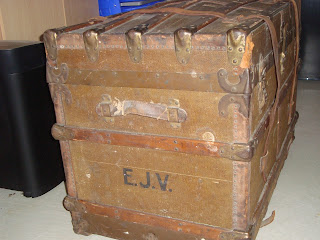 This is a story about cowboys, the settlement of Western Canada, British nobility, brave soldiers and an Ontario family of overachievers. Our story begins with the original column of Joe Fiorito in the Toronto Star about the finding of the long-lost grave of Private Bertie Nakogee. A Toronto firefighter, Bob Clarke, read this column and through Joe, contacted me. He had in his possession an old Saratoga steamer trunk that had been given to him by a Raike family member from near Orillia. This large trunk bore the initials E.J.V. in black lettering on each end. Bob explained on the phone that the trunk had belonged to Captain Edward John Vessey, a World War One soldier that had lived with the Raike family and who had been killed in the war. He asked if I had any interest in it as he had no room for it. Recently it was dropped off and now holds a temporary place in my garage until I complete space in the basement.
Edward John Vessey was a 27 year old senior executive within the Bank of Montreal head office in Montreal in 1914 holding the title of Private Secretary to Sir Frederick Williams-Taylor, General Manager and apparently thought of very highly in the bank's future. While working for the bank, Edward enlisted in the newly-formed (August 1914) 58th Regiment Westmount Rifles militia.  Edward took a leave of absence from the bank September 1915 and attested to the 60th (Victoria Rifles of Canada) Battalion, C.E.F. with the rank of Captain then training in Camp Valcartier. An imposing figure at 6' 2" and 180 pounds, he listed his birthplace as Barnstaple (Devon), England and next of kin as George Raikes (b.1852, Barrie, ON. He accompanied the battalion commanded by Lt.-Col. F.Arthur de L.Gascoigne to England on the S.S. Scandinavian in early November. The battalion went into training in Shorncliffe Camp with Captain Vessey being assigned to the Canadian Military School 3-month Officer's Course then accompanied his battalion February 20 into France. The 60th Battalion had been assigned to the 9th Brigade, 3rd Canadian Battalion, heading to France. Captain Vessey graduated from his Captain's training course "1st in Class Order of Merit, Distinguished in Tactics, Topography, Engineering, Administration, Organization and Law". An outstanding officer prepared for combat and possibly a future Commanding Officer.
The Captain's early years are a bit of a mystery. He listed his birthplace as Barnstaple, Devon, England however I can find no birth with his name in this location. There is however a Edward John Vessey born early 1887 in Astor, Erdington, Warwickshire, a town in the Midlands. I have ordered this birth certificate to obtain further information. Likewise I can not definitely confirm our man on any U.K. census at this time. Next we find 5 year old Edward J. Vessey on the Canadian Passenger Lists 1865-1935 as arriving July 30, 1892 on the S.S. Circassian Liverpool/Montreal accompanied by a Miss. Mary Raikes. We also have found Mary Raikes on the incoming UK Passenger Lists arriving Southampton from New York on the S.S. Minnehaha January 23, 1905. Presumably this Mary Raikes was the daughter of Walter Raikes (b.1824) and possibly the niece of George Raikes. While is is not my intention to provide a Raikes family history, they could certainly be considered as an influential family throughout the 1800's in Simcoe County. Walter and Jane Raikes (born England) owned a large and prosperous farm in Oro Township (Shanty Bay). They appear to have had three sons: George (farmer Oro, b. 1852); Richard (physician - Midland, b. 1859); Harry (rancher and cowboy - Red Deer, b. 1862) and three daughters: Fanny (b. 1853); Georgina (b.1859) and Mary (b.1856). Harry (Henry)  and his son homesteaded tracts of land in Alberta and was at various times a large ranch owner, manager of a huge cattle operation and an influential citizen. Mr. Walter Raikes was the 4th son of George Raikes, Honourable East India Service Company Service (by his wife Marianne, daughter of Issac Currie) and a nephew paternally of Lady William Fitzroy and maternally of Raikes Currie, Esq., M.P., J.P.., D.L., of Minley Manor, Hants. Mr. George Raikes was the 4th son of Thomas Raikes, Governor of the Bank of England, by his wife Charlotte, dau. of the Hon.Henry Finch, son of Daniel, Earl of Winchelsea. Quit a pedigree for the Raikes family! So it was into this family that our young Edward John Vessey was brought in 1905. Although George's wife Annette (nee Saunders, b. 1870) died Feb. 15, 1906 after bearing children in 1900, 1902 and 1904, Edward was brought into the family and according to various sources, adopted by George Raikes (who himself died 1919). George was possibly married earlier as there is another son listed born 1886, mother unknown. This son was Walter George Raikes, born 1887 who died in 1908 by choking.

The 60th (Victoria Rifles of Canada) was the second C.E.F. Battalion formed by this prestigious regiment, the first being the 24th Battalion serving in the 2nd Canadian Division. The 60th sent an early reinforcement draft of 250 men August 27,1916 with the main body sailing from Montreal on the S.S. Scandinavian November 6, 1916. This reinforcement draft may well as contributed to the ultimate demise of the battalion as after valiantly fighting within the 9th Brigade, 3rd Canadian Division, on April 30, 1917 the unit was disbanded supposedly for lack of "French speaking" reinforcements from Montreal. A bit strange as the 60th, Battalion for the most part, were composed entirely of English speaking personnel.

And so Captain Vessey accompanied the 60th Battalion when they entered France February 21, 1916. He was Captain of "D" Company. According to the profiles contained in The Bank of Montreal's Memorial of the Great War 1914-1918, A Record of Service, "at Hooge, Belgium (Battle of Mount Sorrel, June 2-14, 1916) , on June 3, 1916, his battalion was heavily shelled and suffered many casualties.(after relieving the P.P.C.L.I.) Orders came to reduce the garrison in the front line and to move into a communication trench nearby. He had just completed the removal of his men when he was instantly killed by an enemy machine-gun bullet" early morning June 4. Captain Edward John Vessey was buried in the Menin Road South Military Cemetery, located outside of Ypres, Belgium. There is a photo collection relating to the Captain on the Veterans Affairs Canada Virtual Memory website. His medals (British War medal, Victory medal), Memorial Plaque and Scroll were sent to his "foster-brother" Campbell Dyce Raikes in Oro Township. No Memorial Cross was issued as he was unmarried and his mother had "predeceased" him. 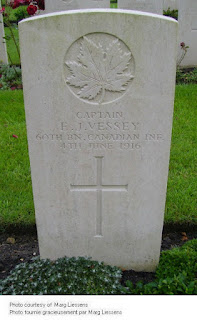 Interestingly, Edward's adopted uncle, Richard Raikes, CAMC,  enlisted September 22, 1914 Valcartier as the Medical Officer of the 4th Battalion, serving through much of the war only to die April 7, 1926 in Penetanguishine, ON. Two of his cousins served as well (sons of  Harry in Alberta):  Lieutenant Walter Henry Raikes #116396, joined the 11 Canadian Mounted Rifles, serving in the 47th Battalion, also direct from the Bank of Montreal, later raising to the rank of Captain Observer No.4 Squadron, Royal Flying Corps. Brother of Walter, Cecil Raikes #117492 enlisted in the 12th CMR in Red Deer. He was gassed twice while serving in France.

So this is the history of my valued trunk. Captain Vessey would had used it in his journey to England and possibly while in France. It would have been sent back to his home in Oro Township after his death, containing his officers effects. Another brave soldier R.I.P.

Once again, thanks to Marika Pirie for the posting of the newspaper clipping and the excerpt from the Bank of Montreal Memorial Roll. Thanks to Marg Liessens for the grave photo parked on the VAC Virtual Memorial site and to Toronto firefighter, Bob Clarke, for sharing the history of the trunk.

I received the birth certificate today (July 31, 2012) for Edward John Vessey. His birthday is the same as shown on the attestation paper so there can be no doubt this is the same man. Born February 26, 1887 in Erdington, Aston, county of Warwick to Richard Edward Vessey, land surveyor and J. Catherine Vessey (formerly Vessey); witnessed by Sarah Andrews, present at birth, Easy Row, Erlington;  George Hill Registrar. That's it! Really doesn't answer anything.

It should be noted that Captain Vessey was also a topic subject on the CEF Study Group Forum www.cefresearch.ca October 2012. One of our esteemed members has speculated that given the somewhat mysterious circumstances that Edward John Vessey came to be resident in Canada and the more than passing resemblance to the then King of England, King Edward VII, son of Queen Victoria,  perhaps our brave Canadian Captain actually had Royal Blood flowing through him? Comparison photos are to be found on the appropriate thread.

Yesterday and strictly by accident coincidence, we discovered the grave of Dr. Richard Raikes, his wife, Lucy, and their infant son, John Keith, in the historic St. James Anglican Cemetery in Penetanguishine, ON
Posted by Bob at 6:34 PM

One clarification regarding the dissolution of the 60th Battalion. The challenge the Canadian authorities in England faced is that there were too many battalions from Quebec in relation to the number of recruits coming in. Quebec had two more battalions at the front than its population warranted and that was without considering the significantly lower rate of volunteering by French-Canadians. As a result, two battalions from Quebec were dissolved in the spring of 1917 as were two British Columbia pioneer battalions. The 60th Battalion was selected as one of the two battalions to be broken up as it was the second last to join the Canadian Corps.

I just heard about this post from my mother. I've learned more here than I ever knew about Jack Vessey, we were always told he was a 'ward' of my great grandfather's, but that's all. I know she told you we have many letters written by him. I have copies as well, you can email me through my profile.

Heather my name is Rick Pyves and I have been researching for three years the 60th battalion and have written a 280 page first draft of a book which I hope to have published in 2014. In order to add a more human element to my story I am trying to incorporate some letters from 60th soldiers in my book and would be very interested in any letters that you may have. regards Rick

Rick you can email me at

Still a mystery as to how Jack Vessey came to Canada and who his biological parents were?

Would love some answers/

researching my late wife's family, she had a great great uncle Peter Barratt who served in D Coy 60th Battalion in the band? Anybody know anything about the band? He had originally been in the 5th Royal Highlanders before the Great War.