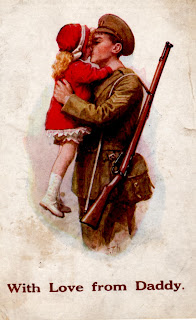 I hope you are still looking after your Momma & Betty for me. Tell your Mom to hold your hand & write me a letter. Hope you are enjoying yourself.

From your loving Daddy" 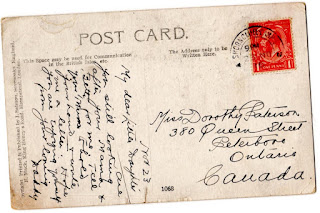 So after a successful bid and it's arrival in the mail, I began my search for this author of this beautiful postcard, A search for the family in the 1911 Canadian Census brought no results, not surprising given that our young lady was probably less than 5 years old in 1916. A search of Canadian Expeditionary Force attestation papers proved inconclusive with a number of possibilities. A Google search for "Paterson" and "Peterborough" led me to the Trent Valley Archives website and their collection of early 20th Century Peterborough City Directories. My request to the archives was addressed by archivist Heather Aiton-Landry, who within a few days had found our Paterson family at the same address in the 1916 directory. With Heather's assistance, we were able to identify our "soldier Paterson" as Sergeant Albert Edward Paterson, #113476. With this information and the information on his attestation paper located with Library and Archives Canada, we were no able to locate the man and his family on Ancestry.ca. We could then order his World War One service record from the same organization thus enabling us to trace his movements and activities during the war. 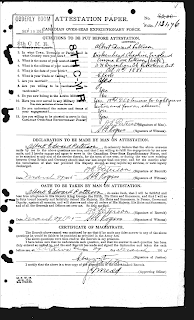 Alfred Edward Paterson was born October 11, 1881 in Birkenhead, Cheshire, England. Parents were Robert Paterson and Amelia Malone. In the 1901 English Census he is shown as having an older sister, Katie, We have found the service record for Albert Paterson joining the historic 17th Duke of Connaught's Own Lancers Regiment, September 5, 1901 in Ballincollig, Cork, Ireland with service number 5637. He gave his home address as 112 Shoe Lane, Fleet Street, London, next of kin Agnes, living in Paris. He served with the Lancers 11 years, five of those years in India with the last four as a Reservist living in Canada. He was diagnosed with Typhoid Fever in 1905 spending 9 months in hospital. We next found Albert Paterson immigrating to Canada arriving Quebec on the S.S.Tunisian sailing from Liverpool September 10, 1910. Soon after, he apparently found employment in Hamilton, Ontario at the Canadian General Electric (formerly Thomas Edison Canada) plant. Soon after we find him marrying Emma Rose Smith in Hamilton June 10, 1911. We did find a single "Emma Smith", living in Hamilton, born 1881, in both the 1901 and 1911 Canadian Census, We also found an "Emma Smith" in the LAC database Home Children born 1882,  arriving S.S. Dominion, one of 137 Barnardo Children headed for Peterborough. Heather-Aiton-Landry did locate the young Paterson family in several Peterborough city directories in a number of locations spread over several years., The common denominator having Albert Paterson employed as a receiver with  Canadian General Electric  in the city. I located the birth registration for Dorothy Agnes Paterson, born August 31, 1913 in Peterborough, with the family living at 51 Hunter Street East, parents Alfred and Emma Rose Paterson,

So Albert Paterson at the age of 33 years enlisted with "B" Company of the 8th Regiment Canadian Mounted Rifles, that were recruiting in Peterborough, on March 29, 1916 as a Sergeant, He trained with the 8th CMR in Barriefield (Kingston) May and June 1915 and shipped with the Battalion to England from Montreal October 8, 1915 on the S.S. Missanbie, commanded by Lieut -Col. John R. Munro, from the 5th Dragoons in Ottawa. The 8th CMR were broken up for reinforcements shortly after arrival in England with 327 other ranks heading to the trenches of Belgium and France with Toronto's 4th Canadian Mounted Rifles and 374 other ranks heading to Ottawa's 39th Battalion, which in turn supplied infantry reinforcements to various units of the 4th Canadian Division  in the field. Our Sergeant Paterson was included in this latter movement.

May1, 1916, Sergeant Paterson was reduced in rank to Private, at his own request, probably in order to be sent into battle. He was transferred May 3, 1916 to the Canadian Army Service Corps Training Camp, Shorncliffe Camp. While serving with this unit on May 15, 1916, he was kicked by a horse suffering a fractured lower patella and had an operation "joining the edges by passing silver wire through drill holes" being hospitalized over 140 days before being discharged to duty and unit in Shorncliffe Camp, Oct. 19, 1916. Private Paterson was transferred to the Canadian Casualty Assembly Centre, Hastings, Feb. 2, 1917 and then to 3rd Canadian Convalescent Centre, St. Leonard's Hospital. Finally released back to the Canadian Army Service Corps DD, Shorncliffe, July 31, 1917. Taken on service Canadian Army Veterinary Corps, Shorncliffe, Oct. 19, 1917. Transferred to 1st Canadian Veterinary Hospital, France, Jan. 1,1918. Transferred to Canadian Labour Pool Jan.25, 1918. Finally to 24th Company, Canadian Forestry Corps (as B2 clerk), France. Treated for bronchitis and leg weakness Oct. 1918.

Private Albert Paterson returned to Halifax, NS on the HMT Baltic Feb. 5, 1919. He was discharged as"having been found as medically unfit for service" March 3, 1919 in Toronto. His intended place of residence was, where else, 380 Queen Street, Peterborough, Ontario.

At this point I have found no further information on the family or their whereabouts except to note from his service file, the death of Alfred E. Paterson, #113476, Feb. 6, 1966 in Veteran's Section, University Hospital, Saskatoon, Saskatchewan.

Young Dorothy Paterson would be 100 years old this year. And younger sister, Betty? We wonder if any family survive?