REINFORCING THE P.P.C.L.I. FROM THE 23RD BATTALION


"After arriving in France with 27 officers and 956 other ranks on December 20, 1914, in six weeks of constant trench duty the Regiment had suffered seventy casualties, including five officers. But wastage from sickness had been abnormal, and the Regiment was for a few days, nearly 400 men under strength. The arrival of the overseas draft which had been left at Tidworth under Captain Agar Adamson brought the numbers up to 700. (February 22, 1915 - Captain A. Adamson, Lt. Martin, 111 other ranks) These reinforcements for the most part came from the broken-up 12th Battalion, CEF. But this draft exhausted all the reserves in sight, for the Canadian reinforcements in England were ear-marked for the 1st Canadian Division, now arriving in France. (the privately raised P.P.C.L.I. were detached in England to the 80th Brigade, 27th Imperial division, British Army). In the spring of 1915 there was no system for reinforcing the P.P.C.L.I. For eight months after their arrival in France the Patricia's had reason to be anxious about their future. Small drafts from various Canadian sources kept up the number during the spring, and fought splendidly in the 2nd Battle of Ypres; but these were secured with difficulty, and after much suspense."

"Princess Patricia's Canadian Light Infantry was never in any sense a territorial Regiment; although, towards the end of the War, it became one of the five overseas battalions (P.P.C.L.I. and, 2nd, 16th, 21st, 38th Battalions, C.E.F.) which were formed for administrative and reinforcement purposes into the Eastern Ontario Regiment with its headquarters at Ottawa, where the Original Battalion was mobilized. 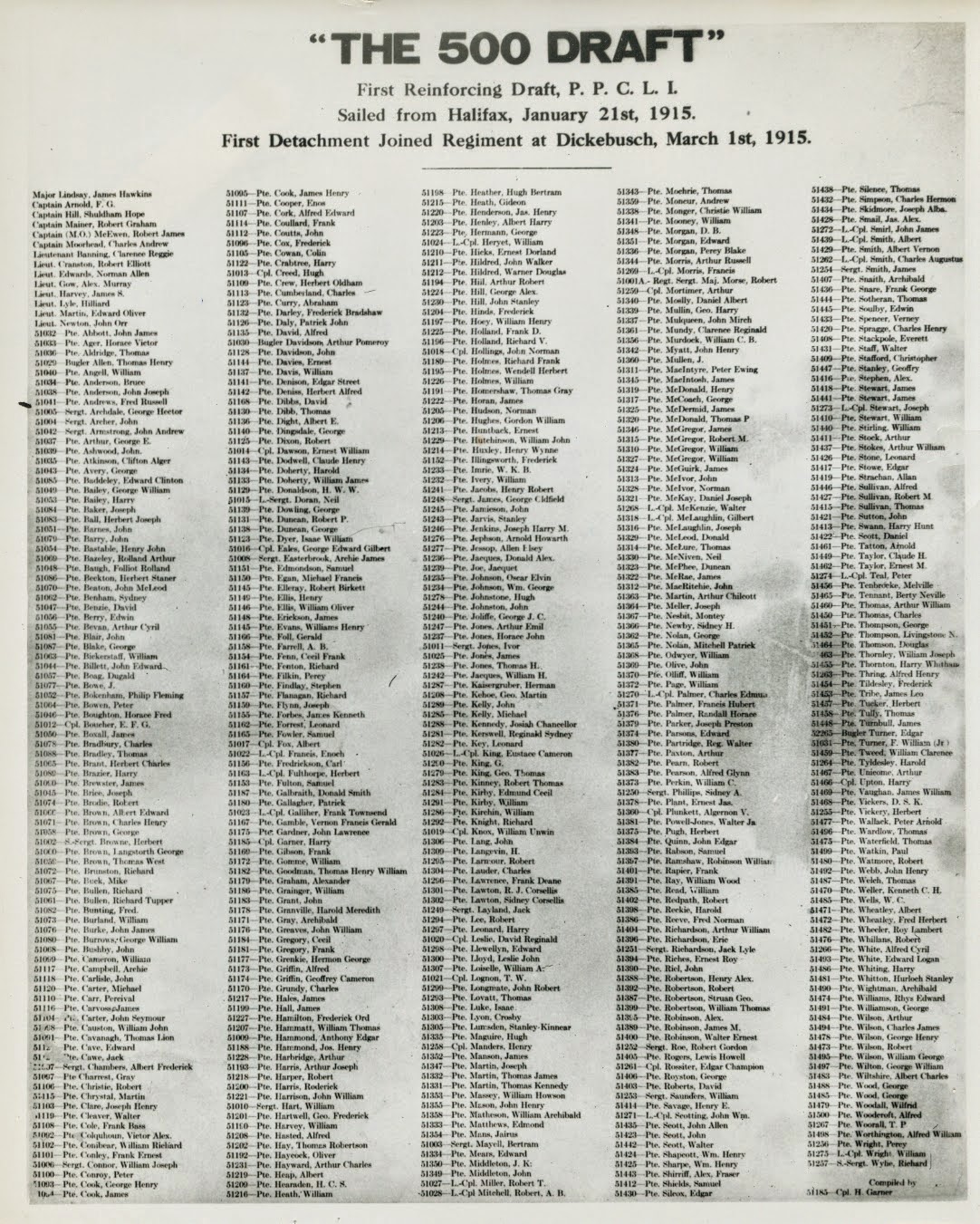 The personnel of the Patricia's in the field was in fact strikingly representative of every Province of the Dominion and the Yukon Territory. The "Originals" and the "University Companies" which together made up nearly 50 per cent of the strength in the field, were drawn from all parts of Canada; while among the 3000 or more other Officers, N.C.O.'s and men who served with the Patricia's in France and Belgium were representative of more than 140 infantry battalions of the Canadian Expeditionary Force, as well as many men who had first enlisted in sister branches of the Force: the Royal Canadian Dragoons and other cavalry regiments, the C.F.A., C.E., C.A.S.C., C.A.M.C., Signalling Training Depot, etc. Many drafts, especially after the middle of 1917, consisted of small parties from four or more battalions of the C.E.F. which has been assembled at the reinforcement Depots for the Eastern Ontario Regiment.

In January to June 1915 the following units provided drafts for reinforcing the Patricia's in the field:


12th Battalion, C.E.F. (New Brunswick,Quebec,Prince Edward Island)
23rd Battalion, C.E.F.(Victoria,Vancouver,Saskatchewan,Alberta,Manitoba,Montreal,Quebec City)
28th Battalion, C.E.F. (Alberta,Saskatchewan,Manitoba)
30th Battalion, C.E.F. (Victoria, BC)
32th Battalion, C.E.F. (Saskatchewan,Manitoba)"
Excepts from Princess Patricia's Canadian Light Infantry 1914-1919, Ralph Hodder-Williams, 2nd Edition Vols.1 & 2, 1968
"Several times during the first six weeks in the line, the Regiment dropped to nearly four hundred men under strength, Only seventy casualties were killed or wounded and the remainder were from exposure and wet. Captain Adamson arrived with the first major reinforcement draft of 111 men while the unit was in Divisional Reserve and resting (Pt II D.O. 2 officers, 119 other ranks)at Westoutre (22 February). Lack of future replacements were beginning to threaten the continued existence of the Regiment. No formal agreement with the Canadian Defence and Militia Department concerning this matter had been reached when the Regiment was first authorized. A number of battalions from the first Canadian Contingent in England were made into Canadian Depot units. These were to feed the 1st Division when it was committed to the continent. It also became the source of reinforcements for the Regiment until June 1915. In particular the men joining the Patricia's came from the 12th; 23rd; 28th; 30th; and 32nd Canadian Expeditionary Battalions (the last four battalions' men collectively known as the "500 Draft". The 12th Battalion supplied most of the first reinforcement draft led by Captain Adamson). The second source of replacements from July to December 1915, and the one that ultimately saved the Regiment from extinction was the privately raised PPCLI Reinforcing Universities Companies."

***NOTE***
We know from the on-line file of Cpl. William Harvey, #51190, that the 27th (Cameron Highlanders) Battalion of Winnipeg also contributed volunteers to the "500 Draft"


Collectively the drafts from the last four units were assembled in Quebec City into one central draft administered by the staff of the 23rd Overseas Battalion and known as the "500 Draft". So the "small drafts" Hodder-Williams refers to (February 22, 1915 - 2 officers,111 other ranks; March 1, 1915 - 8 officers, 146 other ranks; March 27, 1915 - 3 officers, 66 other ranks) were in part, for the most part soldiers from the "500 Draft". These men had sailed from Halifax January 21, 1915 on the S.S. Vaderland with no or very little basic training. As well the majority had no military experience. So one can see that the men in the drafts sent in the February and March drafts would have only the very basic military training, unlike Canadian soldiers later in the war. The "500 Draft" landed in Liverpool January 30, 1915 and were sent to Canadahar Barracks, Tidworth to join the 12th Battalion, which had just been assigned as a reinforcement Battalion to the new 1st Canadian Division which  was about to be sent to France. The February and March drafts were sent to the P.P.C.L.I. from this depot.
Possibly the most noted member passing through the 23rd Battalion coming from the ranks and the one with the most distinguished career and highest ranked officer, was Private Melville Ten Broeke #51456. His service record can be found on-line HERE   Melville Ten Broeke enlisted November 3, 1914 in the 23rd Battalion, CEF in Edmonton and joined the Princess Patricia’s Canadian Light Infantry from the "500 Draft" as a reinforcement soldier in France March, 1915. Born in India of British parents, the 24 year old Civil Engineer claimed to have belonged to the Bedford Territorials in Bedfordshire, England prior to emigrating to Canada, as well as the Canadian 101st Regiment, on settling in Edmonton. He was commissioned in June, 1916 and rose to the rank of Major before the end of the war. On reorganization of the Regiment as a unit within the permanent Force he was accepted with the rank of Major. At the termination of his period of command in 1932, he retired with the rank of Lieutenant-Colonel. On the outbreak of the Second World War, he volunteered once again and was appointed to the Command of the Western Regimental Depot. In 1943, after holding a number of Staff appointments, he resigned due to ill health. Died in Victoria 1963.

Although the Princess Patricia’s Canadian Light Infantry was a privately raised Canadian Battalion, it initially was assigned to the 80thBrigade, 27th Division, British Expeditionary Force. As a component of this unit, it entered the trenches on January 6, 1915 in the Dickebusch area of Belgium and began receiving casualties almost immediately. Particularly, because of the poor trench conditions, men suffered terribly in the first tour of duty from “trench feet” made worse by wet weather and from the flimsy Canadian-made boots with which they were equipped. In a period of less than three months, some 238 of their number had either been killed or wounded and another 200 or so were in hospital for “shell shock”. The casualties reached fifty in the first month including several officers. By February 21, the battalion was given a full week of relief and rest at Westoutre. However a few men from the 1st Contingents 12th Battalion, now considered a reinforcement Battalion, were sent to the P.P.C.L.I. in the field.

These soldiers and the "500 Draft" were the only reinforcements the P.P.C.L.I.were to receive until the early summer when specially raised University Companies began to cross the Atlantic. On May 8, 1915, after the infamous Battle of Bellewarde Ridge, the Battalion numbers were down to 4 officers and 150 men before being withdrawn from battle. We can see from the list of 125 reinforcements received from the 23rd Battalion that 46 died while in service of the P.P.C.L.I. and a further 2 were taken prisoners. The majority were wounded in the Battle of Bellewarde Ridge and other actions in April and May, 1915. Many had only been in battle a matter of days before becoming casualties. The reinforcement soldiers from the 23rd Battalion did the P.P.C.L.I. proud - a least 3 Military Crosses were won, a similar number of Military Medals and several bars, 2 Prisoners of War, 3 battlefield commissions, and a future Commanding Officer of the Regiment was guaranteed.

I believe the first casualty to a 23rd Battalion replacement was Private Harry Crabtree, #51122. From Steve Newman's fine work, With The Patricia's In Flanders, we see:

Crabtree, Harry Private 51122. Born in Rochdale, Lancashire, England Jul 1879. . Served with 2nd Lancashire Fusiliers (Volunteers). Employed as a moulder before joining 23rd Bn 23 Oct 1914. Became a member of the Patricia Reinforcements in Jan 1915 and joined PPCLI in the field in the St. Eloi Sector 11 Mar 1915. He was listed killed five days later on 16 Mar 1915. The enemy assaulted and captured the Mound at St. Eloi on the 14 Mar. The Battalion marched from their Reserve position at Westoutre to Dickebusch and then towards St. Eloi during the same evening. They were to attack and recapture the area West of the Mound in concert with the 4th Battalion Rifle Brigade in the early morning of the 15th. The attack was cancelled after Lt.-Col. Farquhar surveyed the scene after the initial foray towards the German positions. Casualties during this manoeuvre were Lt. Cameron killed along with seven NCOs and men killed. Pte Crabtree was among them. Another two officers and seventeen ranks were wounded. Age 35 (I believe one of the wounded was L/Cpl Walter McKenzie, also from the 23rd Battalion, who died of wounds the next day March 17, 1915)

I'm intrigued by 51428 Smail, Joseph Alba. Very intrigued. Long story... which I will try and make succinct. I have a letter from a JJ Smail written to my Great Great Grandmother supplying condolences for the death of her son Percy Joiner 21166 who was also in the PPCLI. The letter is a treasure. It is signed JJ Smail 51428 PPCLI. However, there is no record of a Smail in the PPCLI that I could find (not listed in the Ralph Hodder Williams Roll of Honour / Appendices nor elsewhere) and I assumed he was not actually in the PPCLI but was part of the Canadian Battalion group linked to them. I have a copy of his Attestation Papers and 51428 was James Alexander Smail (Alba being a poor shortening of Alexander). I have no idea why he would use J as his second initial but anyway.... Was he part of the PPCLI or not?