REINFORCING THE 1ST CANADIAN DIVISION AND THE 23RD BATTALION

REINFORCING THE 1ST CANADIAN DIVISION AND THE  23RD BATTALION

My blogs of the past several  years have of course focused on the 3rd (Toronto) Battalion, Canadian Expeditionary Force and by extension and connection with my grandfather, soldiers whose service numbers are 61***, 62***, 63***, and 64***. This blog is on the unit, the 23rd Battalion, that harbored the men with these service numbers, arguably one of the most important battalions to proceed overseas from Canada. For the 23rd Battalion provided desperately needed reinforcements to units of the 1st Canadian Division and to the Princess Patricia's Canadian Light Infantry. For if it were not for these reinforcements, it is doubtful if units of the 1st Canadian Division would have the manpower to engage the enemy in the Battle of Festubert, May 1915 and the Battle of Givenchy, June 1915 nor would the PPCLI partake in the St. Eloi action March, 1915 or the Battle of Frezenberg May, 1915. (interesting to note that the PPCLI entered this battle with a strength of 635 ranks, already having received the reinforcements from the "500" draft).
﻿
"Three days after the First Contingent sailed from Gaspe, on October 3rd, 1914, Canada made an offer of a Second Contingent which was immediately accepted, with a suggestion from the Army Council that another Infantry Division would be a suitable formation. The eleven-Military Districts had already been warned that more troops would be required: they were called upon to recruit fourteen battalions numbered 18th to 31st inclusive. The Canadian Grenadier Guards were now required to find two companies (after already making significant manpower contributions to the 14th Royal Montreal Regiment Battalion), that is nine officers and 268 other ranks for the new 23rd Battalion".

"Lieut.-Col. F.W.Fisher, Commanding Officer of the 58th Westmount Rifles, Canadian Militia, was authorized on 21st Oct.1914 to raise a battalion for overseas service. Allotted the number "23rd" in the sequence of overseas units, it was to be commanded by Lieut.-Col. Fisher himself. Simultaneously the first exclusive "French-Canadian"unit, numbered 22nd and to be raised by Lieut.-Col. F.M. Gaudet was authorized; to fill the ranks, all French-speaking men of the 23rd were ordered to be transferred to the 22nd. To make up resulting shortages the Western Districts sent 500 men: M.D.10-100 men (6 Nov.1914); M.D.11-200 men (9 Nov.1914); and M.D.13-200 men (4 Nov.1914). The instructions to Col. Fisher were to recruit the H.Q. and two companies in Montreal, and two companies in Quebec City and District. For the two companies in Montreal, the Canadian Grenadier Guards supplied nine officers, and 268 other ranks. The H.Q. and the two Montreal Companies were stationed in the Peel Street Barracks, Montreal; but the quarters being overcrowded, on December 9th, 1914, they were moved to the Emigration Buildings, Louise Basin, Quebec, where the other two companies had already been mobilized. The Canadian winter climate prevented much outdoor training, but a certain amount of work was done on the ice of the frozen St. Lawrence River, while the large C.P.R. sheds made good indoor training places. The Battalion was inspected by H.R.H. the Duke of Connaught (30th Dec, 1914) and the Minister of Militia, Sir Sam Hughes (15th Dec, 1914), who both spoke words of praise. On January 15, 1915, a draft of 3 officers and 250 other ranks were sent direct to the Princess Patricia's Canadian Light Infantry, training nearby (at St. Joseph de Levis east saide of the St. Lawrence River).

On February 15, 1915, move orders were received, and on the 17th, the Battalion entrained at Levis for Halifax, where it embarked on the S.S. Missanabie, sailing on 23rd February. Arriving at Avonmouth on 6th March, it proceeded to Shorncliffe Camp, where it was quartered in Moore Barracks. The 23rd Battalion went to England as a provisional reinforcing unit, but instructions had been given by the War Office to keep it intact, and prior to the urgent call for reinforcements by the 1st Canadian Division in April, 1915, it had every chance of going to France as a Battalion. On 26th April it was called upon to supply drafts to various battalions in France, which had suffered losses in the Gas Attack at Ypres, and by 2nd May the whole Battalion, with the exception of some details and a few of the H.Q. Officers, had gone to the front. The numeral was then given to a reinforcing and depot unit, and until the end of the War the 23rd Reserve Battalion functioned as such at Shorncliffe, Shoreham and Bramshott Camps in succession. Owing to the system, or lack of system, then prevailing at Shorncliffe, many of the officers and men, instead of being sent to reinforce Montreal Battalions in the field, were scattered, some going to Toronto Battalions, while men from Toronto reinforcement units were sent to Montreal battalions. The bulk of the 23rd were however sent to the 13th (RHC) and 14th (RMR). Of the officers Lienuts. Anderson and Buchanan were drafted to the 4th (Ontario) Battalion, Lieuts. Chisholm and Weston to the 3rd (Toronto) Battalion, Lieuts. Sumption, Dobbie and Richardson to the 14th R.M.R. It is a matter of regret that the 23rd did not serve  in France as a unit; it would without a doubt have given an good account of itself; but drafts sent to the front proved themselves valuable and efficient reinforcements, as their record shows".


﻿
Few military enthusiasts or historians have paid much attention to the 23rd Battalion, it nevertheless remains one of the most important battalions raised after the Canadian Corps formerly entered the war. The sacrifices and contributions made by this single battalion in reinforcing Canadian 1st Contingent, as well as that of it's sister reinforcing battalion, the 32nd Battalion, remains all out of proportion to the structure of the Canadian Expeditionary Force. The 23rd Battalion, and later it’s successor, the 23rd Reserve Battalion, was instrumental is supplying quality, trained reinforcement soldiers after devastating losses in the 2nd Battle of Ypres, April 22-28,1915. It reinforced the 3rd (Toronto) Battalion (296 men May 3, 1915, Platoons 2, 3, 4, 7, and 8 along with 4 officers), the 4th(Central Ontario) Battalion (about 250 men), the 13th (Royal Highlanders of Canada) Battalion (265 men April 28, 1915) , the 14th (Royal Montreal) Battalion (275 men May 6, 1915; Platoons 9, 10, 11, and 12 along with two officers), the 15th (48th Highlanders) Battalion (52 men May 14, 1915), and the PPCLI Battalion (125 men in the "500" Draft PPCLI), after their devastating losses in April, May and June, 1915. The 23rd Battalion’s commanding officer, Lt.-Col. Frank W. Fisher, was later to lead the 14th (Royal Montreal) Battalion in the front lines and still later commanded all reserve units in England. These men came from the same source regiments that the balance of the "500" Draft to the Princess Patricia’s Canadian Light Infantry came from and probably moved east to Quebec on the same trains. These reinforcements came principally from the, 29th ( Vancouver) Battalion, 28th (Saskatchewan) Battalion, 30th ( Victoria) Battalion, 31st (Alberta) Battalion and the 32nd ( Manitoba) Battalion who were all recruiting actively at the time. Each was requested to provide 200 recruits. In practice the Battalions asked for volunteers - those who wished to to get to the front quicker - there were no shortage of volunteers, many had previous service with Imperial Forces and/or service in Canadian militia units. To further confuse the issue, the 23rd Battalion was also requested to supply troops directly to the PPCLI "500" Draft. All the service numbers for these reinforcements to the P.P.C.L.I. held service numbers in the 51... range. A very large percentage of these men had short longevity and a high casualty rate. One of these men became a future Commanding Officer of the P.P.C.L.I. (Melville Ten-Broeke #51456). 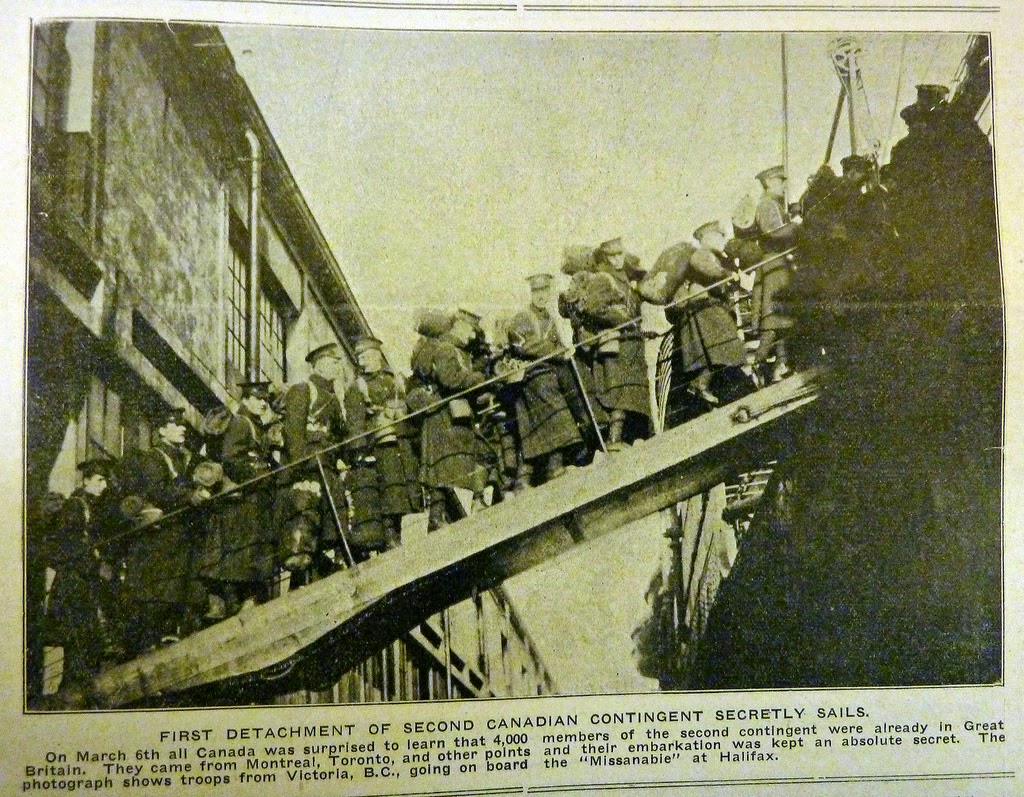 The instructions to Col. Fisher were to recruit the H.Q. (thus a number of French-speaking troops – cooks, drivers, service personnel, etc.) and two companies in Montreal, and two companies in Quebec City and District. For the two Montreal Companies, both the 1st Regiment Canadian Grenadier Guards and the 58th Westmount Rifles were large contributors. The C.G.G. supplied nine officers, and 268 other ranks. The 58th Westmount Rifles supplied besides Col. Fisher, four officers and 200 ranks. Included in this number were Captain Thom with 23 signalers, the Bugle Band, as well as a battalion Motor Cycle Corps. A small number of men enlisted from the 3rd Regiment Victoria Rifles of Canada but as this Regiment was raising the 24th Battalion at the same time, the number was very limited.
Move orders were received on February 15 and on the 17th the Battalion entrained at Levis on the Inter-Colonial Railway for Halifax. Embarking on the 19th, the 23rd Battalion departed Halifax on the almost new (Oct. 1914) "S.S. Missanabie" February 23, 1915 with a strength of 35 officers and 942 other ranks (not including the earlier PPCLI draft). A brief stop in Queenstown (Cork) from a U-boat scare and landing at Avonmouth (Bristol) March 7, 1915. They proceeded to Shorncliffe Camp, Moore Barracks, which was to be their home for a short period. Some ironies: the S.S. Missanabie was to be torpedoed and sunk September 8, 1918, 50 miles off of Queenstown with a loss of 45 lives; John Cody's Irish family (#63207)  departed from Queenstown at the turn of the century for America. 26 years later his son, and my father, John Cody, Chief Petty Officer RCN, spent a horrific New Years in 1941 while in Bristol harbour (Avonmouth) aboard a merchant ship during a Nazi bombing firestorms.

OFFICERS OF THE BATTALION

This blog is sort of a compilation from a number of different sources. Therefore parts may be somewhat repetitive and not flowing in an ideal literary manner. I apologize for that. However  hopefully the intent (to illustrate early reinforcement sources for the 1st Canadian Division) achieved success.
Posted by Bob at 4:37 PM