Canadian author and historian, Norm Christie, has described the Battle of Arras, in his book For King and Empire The Canadians at Arras August-September 1918 as " the Battle of Arras and the breaking of the Drocourt-Queant Line was the greatest military achievement of the Great War." In 9 days of heavy fighting the men of the Canadian Corps broke through 5 successive German defensive lines and cracked the Drocourt-Queant line. Their constant pressure finally turned the northern flank of the impregnable Hindenburg Line forcing the Germans to excavate recently captured territory, from St. Quentin to Ypres in the north."

So it was in this context their my relative, Herbert John Tuffrey lost his life. Badly wounded while attacking the German Line in September 2, 1918, he succumbed to his wounds at #3 Canadian Field Ambulance Depot and is buried within Faubourg D'Amiens Cemetery, Arras.

We will probably never know what brought Herbert John Tuffrey, under the alias, Arthur Bartlett, to the flat, barren Saskatchewan prairie or why he was given two land grants in Plumbridge homesteading at the location NE13.23.18.W3 (the name changed 1922 to Lacadena). He emigrated July 3, 1914 on the Empress of Britain landing in Quebec. We do know he was a cousin of my grandmother, Alice Edith Tuffrey and that his brother, Leonard Tuffrey had emigrated to Toronto with his wife, Annie Lavina, prior to 1914. (see my previous post on Leonard Tuffrey). Herbert John was the third oldest son of Edward and Annie Tuffrey, born 1881 in Bletchingdon, Oxfordshire. Most of the Tuffrey families lived in Bletchingdon or nearby, Weston-on-the Green. So it was a bit of a mystery, to say the least,
when he enlisted into the 128th Battalion on December 23, 1915 in Swift Current, Saskatchewan under his assumed name Arthur Bartlett. He did list his widowed mother, Annie Tuffrey, now living in Maidenhead, Berkshire, as his next-of-kin, possibly unaware of his younger brother living now in Toronto. Stating that he had served previously 12 years in the Norfolk Regiment, I have been unable to verify this statement, although there is no question he served previously in the British Army. The 128th Battalion arrived in England August 24, 1916 aboard the S.S. Grampian with a strength of 32 officers and 1100 ranks under the command of Lieut.Col. F. Pawlett. After arrival most of the men were sent to the 1st Canadian Mounted Rifles or the 46th (South Saskatchewan) Battalion as reinforcements. At this point, Arthur Bartlett was an Acting Corporal. However he reverted to the ranks to as Private Bartlett ending up with the latter unit in May 23, 1917 on the Western Front. On August 20, 1917 he received a GSW to his right arm and leg at Lens being hospitalized for two months in England. He was discharged and returned to the 46th Battalion in October 1917. However in the 10th Brigade's assault on Drury, official records state that "while moving forward with his section in an attack and before the objective (Village of Drury, Cambrai) had been reached, this soldier was hit in the hip by enemy shrapnel. His wound was immediately dressed and he was evacuated to No.3 Canadian Field Ambulance, where he succumbed to his wounds the same day (shell wound, compound fracture femur).

According to his CEF service record, it wasn't until December 1922 when an authorization for a name change to Herbert John Tuffrey was sanctioned. At this point we should mentioned that Arthur Bartlett has two "Form of Wills" residing in his service file, one dated April 17, 1917 and one dated April 3, 1918, both substantially different. The first left ALL his real estate and personal estate to his brother, Arthur Henry Tuffrey. The later one leaves all his real estate again to his brother Arthur Henry Tuffrey or his sons, in case of death but also one UK pound per week to his mother, Mrs. Annie Tuffrey "during her lifetime". However his personal estate is left to his brother Arthur Henry Tuffrey, subject to him paying paying out of the estate fifty UK pounds to each of his brothers: William Edward Tuffrey; Harold Tuffrey; Leonard Tuffrey; as well as ten UK pounds to his Aunt Mrs. Thomas Clarke and twenty UK pounds to Mr. George Atcheson, farmer, Plumbridge, Saskatchewan. In addition on the margin of the will, he appointed Arthur Henry Tuffrey and George Atcheson as co-executors. The foregoing seems significant as having no assigned pay and having his pay accumulated and with bond purchasing it appears he had a balance of $600. on his death as well as owning title to the land he had homesteaded in Saskatchewan.

However on renewing my interest in genealogy and my Tuffrey Family this past week, I stumbled into solving the huge mystery of why Herbert John Tuffrey had assumed the name Arthur Bartlett on travelling to Canada prior to the war, obtaining a Canadian Land Grant in that name and enlisting in the Canadian Expeditionary Force with this name as well. Apparently during his service in the British Army in 1902, he married an Edith Ellen Springthorpe in Warwick, Warwickshire. Between the years 1901 and 1913, they appear to have had FIVE children together, three males and two females. I did find Herbert Tuffrey in the 1911 UK Census living in Norfolk on the army base and being a groom in the British Army. As well there is an Amelia Mary Tuffrey, born 1918, attributed to both partners, so Herbert must have made a visit home during his hospitalizations in England? I guess Herbert couldn't deal with all the hungry mouths, screaming in the household or whatever. So that sort of explains, at least in part, the name change. 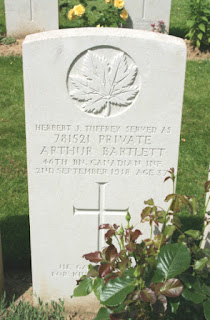 Herbert John Tuffrey was born 1881 to Edward (a baker) and Annie Tuffrey (nee Cotterill) who resided in a row of labourers' cottage in Townsend, near the Red Lion pub. Nearby was my grandmother's family, born in 1889 to Thomas and Annie Tuffrey (nee Jeffkins), baptised in the same parish church, St. Giles. Edward Tuffrey died at the age of 36. Soon after his death Annie took her remaining children and settled in Maidenhead, Berks. Perhaps this was her family home? There was also, living in Bletchingdon as well, an Arthur Bartlett, so perhaps Herbert swiped his alias from his friend. The Tuffrey Family has been traced back to about 1700 living in Weston-on-the Green. The name is common in French Huguenot circles also as Tuffery, Tuffree and various derivatives. As protestants, they were persecuted during the reign of Louis XIV and emigrated to destinations around the world in search of religious freedom. Many landed in England particularly in Oxfordshire where they spread out across the county.

So our mystery as to why Herbert John Tuffrey changed his name to Arthur Bartlett, for the most part, has been solved. Married previously and with perhaps marital and legal problems he may have sought to escape persecution. It is also possible as well he had not completed his 12 year obligations to the Norfolk Regiment, so homesteaded in Canada and always intended to send for Edith Ellen and the children at the right time until the war interceded. Nevertheless he died in the service of his country and needs to be remembered!
Posted by Bob at 1:19 PM