THE BATTLE OF COURCELETTE AND LOSS OF PRIVATE GEORGE SHARPE #447212

The massive Battle of the Somme commenced on July 1st, 1916 ending November 18, 1916. It has been described as the most intensive and brutal battle in military history. However it really was composed of a number of smaller battles involving Allied troops from Britain, Australia, New Zealand, Canada, France against the resilient and determined German defenders in the idyllic French countryside surrounding the valley of the Somme River. Again we will defer to Canadian historian and author, Norm Christie  for his brilliant overview of the battle leading to the Battle of Courcelette on September 15, 1916:
"The Battle of the Somme opened on July 1st, 1916 with a British attack launched along a 28 km front. Ushered in with a two-week bombardment of the German positions, the British expected the July offensive to be an unqualified success. They were on the way to Berlin! But the strategy of a heavy barrage, followed by a general assault, failed. The British Army, on July 1st alone, suffered 60,000 casualties, including 20,000 dead. The shock of this enormous tragedy still holds a place in the consciousness of the British people.

The attack north of the Albert-Bapaume road from Ovillers to Gommecourt was a complete failure. South of the road, where the German lines swung in an easterly direction, the village of Fricourt was captured and the German defences in this "underbelly" pierced. British forces continued their attacks to the north throughout July and August, slowly turning north against heavy German opposition and numerous counter-attacks. By the end of august, the fighting south of and along the Bapaume-Albert Road had reached the outskirts of Pozieres, the highest point on the road. The fighting was severe in the area around Pozieres. Australian forces painfully and expensively drove the Germans from the village, then pushed north and east toward Mouquet Farm and Courcelette. The Pozieres windmill, on the high point directly east of the village, was captured by the Australians at the end of August." The Canadians On The Somme - For King and Empire, Norm Christie, CEF Books, Ottawa, 2007.


So by September 15, the Canadian Corps consisted of three Infantry divisions - 1st, 2nd and 3rd Divisions. The subject battalion of this post, the 31st (Alberta) Battalion were in the 6th Brigade in the 2nd Division along with the 27th (Winnipeg), 28th (Saskatchewan) and 29th (British Columbia) Battalions. The Canadian Corps were asked to make on attack on the village of Courcelette and surrounding area on September 15. It was to be their first major in the Somme. The 2nd Division were responsible for the taking of a strong redoubt 1/2 mile south of Courcelette called the Sugar Factory as well as the village while the 3rd Division's objective was the ground between the village and a location called Mouquet Farm. The Canadians would have the use of a new weapon - six British tanks. The early morning attack towards Courcelette was lead by the 27th and 28th Battalions of the 6th Brigade with the 31st Battalion in support. The 4th Brigade attacked south along the Bapaume Road with the 5th Brigade in reserve. All along the 10 kms of the Canadian attack, objectives were obtained, albeit at high cost. Casualties were high with the battlefields littered with dead and wounded Canadians and Germans. By late afternoon the 2nd Division had captured their objectives of Candy and Sugar Trenches and most of the village of Courcelette. Counter-attacks were made by the Germans over the next few days but the ferocious Canadians held ground. On September 22, the 6th Brigade were relieved by the fresh 1st Division with the village and surrounds finally totally in Canadian hands.
At this time we should point out instructions found in the Battalion war diaries for September 14, the Adjutant, Lieut. C.B.Hornby, claimed at 16:00k that "I saw the stretcher bearers and give them final instructions, location of R.A.P. (Regimental Aid Post), etc. 6th Canadian Infantry Brigade is making an attack on the enemy at 6:20k, Sept 15.31st Battalion will support 27th and 28th Battalions and in consequence be somewhat scattered". The "C" Company Sergeant Major J.S. Park ended up commanding "C "Company after all the officers were killed. In his report he stated that " at about 5:00k our wounded were brought from shell holes to this trench during the night, and were carried out this AM by Stretcher Bearer Parties". C company was attached to the 28th Battalion (less one platoon) as
﻿ an attack Intermediate wave  and Mopping Up Party save one platoon as carrying party. The trench referred to was a German Communication Trench parallel with the Sunken Road. Lieut Norris, in charge of "D"Company supporting the 27th Battalion, stated "I left the trench about 5:15am and proceeded as ordered to X.15 area leaving behind a strong party to assist wounded, under the direction of Lieut.H.P.Morgan who reported to me that all wounded were removed to dressing station". L/Cpl E. Barnes was one of the stretcher bearers and was commended. Needless to say the casualty count for this entire operation on September 15 was extremely high. The list for the 31st Battalion seems rather extensive given the fact that the battalion remained in support mode for the operation.
There were two types of Canadian stretcher bearers (SBs) in the Great War; Regimental SBs and those in the Canadian Army Medical Corps The ones at regimental level were in infantry battalions; traditionally in peace time these men were part of the battalion band and were musicians as well as SBs, but following the formation of Kitchener’s Army in 1914 that gradually began to change and men were selected for the aptitude rather than their ability to play an instrument, with the medical training coming second. Regimental SBs were the first port of call for battlefield wounded; they would search the battlefield for casualties and take them to the Regimental Aid Post for treatment by the RMO – the Regimental Medical Officer – usually a Lieutenant or Captain from the CAMC. From here they would be taken to a collection point where SBs from the CAMC would take over and transport them back to the nearest Advanced Dressing Station (ADS) or Main Dressing Station (MDS). The weight of a wounded man was something to be reckoned with and while in pre-war training SBs practiced in pairs, the reality on mud-soaked battlefields was that it would take more personnel to evacuate each casualty even on relatively good ground; as illustrated here.
The following is a letter written by the Medical Officer of the 31st Battalion, Captain Harold McGill, to his future wife in Calgary, from the front lines, shortly after the September 15 battle:


The nights however are becoming quite cold and the men find it none too comfortable sleeping out on the ground. The battalion has lately been in 2 heavy engagements with the enemy and we expect to be at it again before long. We apparently have the Huns shifting back but those of us who are engaged in the pushing process have little heart to rejoice after we find so many of our officers and men gone. I suppose though that is the price of victory. In our first engagement I had my batman killed by a piece of shell. In the last show we were in my stretcher bearer sergeant, the finest little fellow in the battalion, had his leg torn off by a shell and died of wounds in the F. Ambulance dressing station. I saw him after he was hit. He bid me good bye saying he had tried to do his work and was sorry he was not able to carry on to the end. It made me feel like a baby to hear him talk like that and I could very easily have made a fool of myself. He was the last one left of the stretcher bearers I brought from Calgary and was known and loved throughout the battalion. It is not so much the loss of him as a stretcher bearer that I feel as the personal loss of a friend. Teddy Barnes was his name and he had brought honours to the battalion by his athletic prowess. I must write to his mother. 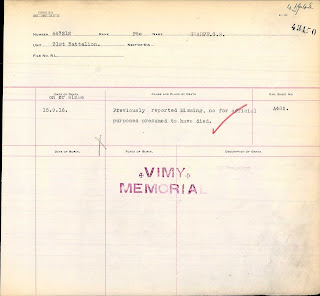 So now it is time we introduce the man that inspired this post, Private George Samuel Sharpe #447212. A recent modest purchase of this man's Victory Medal reintroduced me to the Somme and in particular the participation of the 31st Battalion in the Battle of Courcelette. Private Sharpe has proved rather elusive to trace. I managed to find him in the 1891 English Census, age one year, living in Roxton, London England with family. However apparently his father, Arthur Edward Sharpe died in 1895 and George was raised by his mother Elizabeth and stepfather. I found a George Sharpe in the 1911 English census, correct age, as an inmate of the Borstal Youth Institute, Feltham. However I was not able to successfully find him emigrating to Canada. He shows up June 3, 1915 in Calgary, Alberta, enlisting in that city's 56th Battalion, listing his occupation as a blacksmith. The 56th Battalion was authorized November 14, 1914 with the main body (two reinforcing drafts were sent earlier) embarked for Britain from Halifax March 20, 1916 on the S.S. Baltic. The battalion was absorbed into the 9th Reserve Battalion with most members being sent to the 31st Battalion as front line reinforcements. So at some point, Private Sharpe was sent to the 31st Battalion ending up as a stretcher bearer in the Base company. Canadian Virtual War Memorial
Thus he was one of the stretcher bearers, Lieut. C.B. Hornby gave his final instructions to in the afternoon of September 14. After the attack by the 6th Brigade on September 15, Private Sharpe was listed as "Missing in Action". His remains were never identified so he is listed on the Vimy Memorial as having no known grave.
Commonwealth War Graves Commission Some of the other men believed to have been members of the Battalion stretcher bearer section and taking part in the battle were: Pte Joseph Saunders, #44619 (KIA); Pte Douglas McDowall, #435438 (KIA); Pte Thomas Simner, #79973 (wounded); Pte William Fraser, #80163 (wounded); L/Sgt Edward Barnes, #79282 (MM) and L/Cpl Thomas Bright.

So the actions of the 6th Brigade and 31st Battalion on September 15, 1916, saw the Sugar Factory be captured, Sugar and Candy Trenches in Canadian hands and the village of Courcelette be entered. A success at terrible cost. 318 men of the 31st Battalion gathered the next morning in the jump off trenches, out of a total of 722, over 50% casualty rate. Although the 31st Battalion were relieved in the morning of September 16, the 2nd Division was right back at it on September 25 and again suffered serious losses during the Battle of Thiepval Ridge, September 25-28, 1916. Here are some outstanding Canadian images of the Somme including stretcher bearers. https://www.flickr.com/photos/lac-ac/albums/72157654511470588 and http://wartimeheritage.com/storyarchive1/story_somme_1916.htm