THREE BROTHERS AND AN AIRPLANE

I have profiled members from my wife's Clearwater clan in the past and their service during The Great War. I would like to continue with this family and tell the stories of three Clearwater brothers and the Supreme Sacrifice for two of them. Robert Clinton and Ray Lloyd Clearwater were brothers with 19 years separating their births, Robert being the oldest born in Scotia Junction, ON in 1893. Wesley Calvin was between the two in age being born in Scotia Junction in 1897. 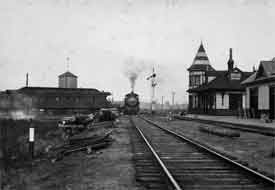 The story of the Clearwater family being one of Muskoa's first families has already been told. Scotia Junction was the railway junction where J.R.Booth's 135-mile Ottawa, Arnprior and Parry Sound Railway crossed the Grand Trunk Railway running from Toronto through North Bay. John Wesley Clearwater was a son of Edgar Boviere Clearwater, a Dutch descendant American 1st Family named Klaarwater from the Hudson River Valley and half brother of Floyd Clearwater, former publisher of the Huntsville Forester, town councillor, school trustee and former Postmaster. John Wesley and older brother James Edgar emigrated from Scotia Junction to Manitoba and Saskatchewan respectively with their families to become homesteaders in the early 1900's. It was in McAuley, Manitoba that John Wesley, wife Catherine and the seven Clearwater children settled, moving to Welwyn, Saskatchewan a decade later. Ray was born in McAuley July 9, 1912. 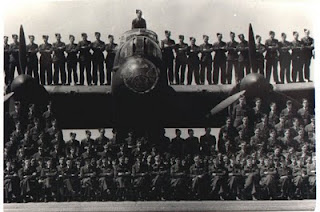 Robert Clinton Clearwater attested to the 10th Canadian Mounted Rifles on December 12,1914 in Moosimin, SK at the age of 31 with a service #115065. Before proceeding overseas with the battalion, he was hospitalized in Portage La Prairie for an appendectomy Nov. 21, 1915. This was to be the first of a long episode of medical problems. The 10th CMR arrived in England on the SS Olympic May 7, 1916 understrength. The men were immediately dispersed to other CMR and Cavalry units. Robert soon after arrival was hospitalized for Influenza. Promoted to Lance Corporal (although later revoked due to "inefficiency") he was transferred to the Canadian Light Horse. This unit later served under the 1st Canadian Motor Machine Gun Brigade. At various times while in the service of the CLH, Robert was hospitalized for gall stones, abdominal infection, groin abscess, bowel abscess, influenza again, severe back acne, thrown from a horse suffering severe lacerations & sprained foot, and finally in 1919, pleurisy and tuberculosis. He served in France from August 11, 1916 to November 9, 1918 and although his service record does NOT make specific mention, I strongly believe he was gassed at some point. Returning to Canada July 11, 1919 Robert Clinton was admitted to Winnipeg Military Hospital. Presumably his death occurred there in the hospital on July 2, 1921. He is buried in Welwyn, SK Cemetery.

Wesley Calvin Clearwater was working on the family farm and single when he was drafted under the Military Service Act, 1917 on June 11, 1918 in Winnipeg. His service # was 3347566 with a classification of C-2 (fit for service in Canada). He never served overseas. Father John Weley Clearwater was killed in a farming accident November 10, 1935.

Ray Lloyd Clearwater (his name is incorrectly spelt as Roy on both the CWGC and VAC Virtual websites-they have been notified) applied to join the Royal Canadian Air Force in 1940. Working the family farm and after waiting over six months he was accepted and entered flying school in Manitoba as a Pilot Sargeant. After a number of postings and training in Canada, he was sent to England. In July 1942 he crashed his Oxford trainer aircraft at RAF No.14 A.F.U. Ossington. He served as a Pilot Instructor in England, based for almost two years mostly at RAF Lossiemouth in north Scotland flying and teaching pilots on multi-engined aircraft. Finally being accepted for overseas service, he was transferred to 12th RAF Squadron, RAF Wickenby in Lincolnshire and promoted to Flight/Lieutenant (Pilot), given command after short training of a MkI Lancaster 4-engined bomber and told to pick his 6 man crew. 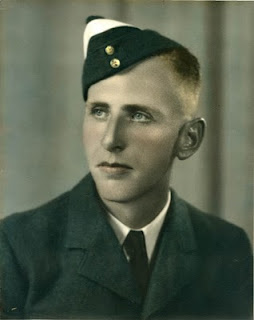 Flight Lieutenant Clearwater and crew had flown 11 sorties over Germany, France and Holland from August 25, 1944 until the early morning of October 14, 1944. On this day, they were assigned to Lancaster MkI NF928 for the first time. NF928 had been delivered new to 12th Squadron and by this time had a total of 48 hours on her engines. This sortie was to be called Operation Hurricane in which Bomber Command was to operate 3 different raids on the German industrial city of Duisberg, utilizing over 1000 aircraft for the first time on each raid. Three Lancasters from 12th Squadron based in RAF Wickenby did not come home in the first early morning raid - NF928 was one of the three. 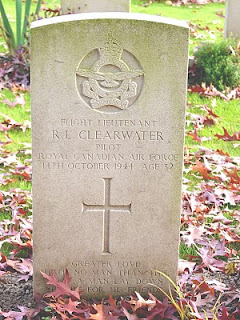 No one actually knows what happened to Lancaster NF928, to Flight Lieutenant (Pilot) Ray Lloyd Clearwater and to the crew of the aircraft. Speculation has the fully loaded airplane being hit by anti-aircraft fire. However 17 bodies were eventually found near the town of Dinslaken and witnesses tell of a huge explosion and ball of fire. It is entirely possible that either two aircraft collided or a dropped bomb hit NF928 from another aircraft and they both exploded. 66 years later relatives of the crew are still trying to determine the cause of the lost of the Lancaster bomber. Witnesses still survive and some of the aircraft wreckage has been recovered. It is an ongoing story that we hope to resolve at some point in the future.

All the recovered remains were eventually identified and interred in Reichswald Forest Military Cemetery, side by side. Mother Catherine passed away about 1948. Wesley Calvin married Francis Mary Jennings after World War One and eventually moved to Vancouver where he died June 7, 1981. There now is a Geo--Memorial location called Clearwater Bay, in Northern Saskatchewan named after Ray Clearwater. Located at 59.01.138 and 108.01.05. So far all attempts to locate the Pilots logbook of Ray Clearwater have been in vain.

I have put together a rough article titled The Farmer That Wanted To Fly with the intention of eventually publishing the entire story of Ray Floyd Clearwater and Lancaster bomber NF928. Would be glad to share it if anyone would like a copy.

June 18, 2013
A newly published book (May 2013) has been released by British publishing company, Flying High Ltd. Written by aviation enthusiast and relative of one of the perished crew members of HF928, Marc Hall, it is titled BOMBER COMMAND, OPERATION HURRICANE and includes the story of pilot Ray Clearwater, the crew of the Lancaster and the trail of events that lead to the destruction of the bomb laden heavy bomber. A worthwhile book for the interested!
Posted by Bob at 10:10 AM
Labels: THREE BROTHERS AND AN AIRPLANE