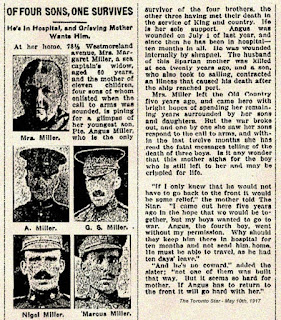 Over the years Mrs Charlotte Wood of Winnipeg has received much of the publicity surrounding her lost of children during World War One. At one time she claimed to have lost five sons I believe and had seven sons fighting. However Toronto had a mother who suffered similar losses without all the hoopla. Mrs. Margaret Miller was a native of Wick, Caithness, Scotland and married to Captain Alexander Miller December 11, 1874. Together the couple had eleven children between 1875 and 1897: nine sons and two daughters. Nine children survived by December 22, 1896 when Captain Miller succumbed to injuries suffered while piloting the schooner "Ban Righ" from Sunderland to Wick with a load of coal hitting a rogue wave while at sea.
First born Alexander Miller born 1875 died as a sailor in Australia in 1895 with two-year William Miller dying in Wick 1897. Otherwise most of the children emigrated to Canada at different times prior to World War One with Margaret following in 1912.

Private George Smith Miller, #135794, 19th Battalion
George Miller, born 1878, a married Toronto Street Railway conductor with 3 small children, enlisted July 27, 1916 with Toronto's 74th Battalion. He also served with British Forces in South Africa. Transferred from the 36th Reserve Battalion to the 19th Battalion in the field. He was "Killed in Action in the trenches S.W. of Vimy April 23, 1917" He has a full page on the Veteran Affairs Canada Virtual War Memorial HERE 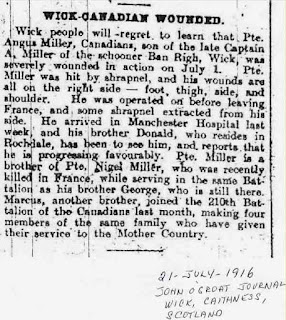 Private Angus Miller, #454203, 59th Battalion
Angus Miller, born 1891, had emigrated to Toronto. However on June 14, 1915 he attested in Smith Falls, ON to the 59th Battalion and travelled to England with that unit. He was transferred to a front line Battalion apparently and was severely wounded with shrapnel on July 1, 1916 right side foot, thight, side and shoulder. Operated on in France before being sent to Manchester Hospital.  He was transferred to a hospital in Rochdale because the only brother he had left in Britain was a Donald, Angus Miller, who happened to live there with his family. Angus was there for about a year before he was well enough to come back to Canada. Died of complications from his wounds in Toronto 1952.

Mrs. Maureen Materi has done enormous amount of research, is a granddaughter of Margaret Miller and has a her research and many family photos publisher HERE . This post relies heavily on her information.

Thanks to Marika Pirie for her newpaper clipping from The Toronto Star.﻿
Posted by Bob at 6:38 PM