WAR WASTAGE IN WORLD WAR ONE AND THE 3RD BATTALION

WAR WASTAGE AND THE 3RD BATTALION

The term "trench wastage" gets quit a bit of use when referring to a unit's time in the front lines that generally not active for a period of time. The term refers to the sickness, disease and occasional sniper kills a Battalion might endue. However I believe there could also be a use for the term "war wastage" when soldiers are killed needlessly for no apparent reason while out of the front trenches. Recently when looking for details on a future blog post on the 3rd Battalion and the Somme, I read some of their earlier war diaries back to the end of the Battle of Mount Sorrel. Historians generally state that the Mount Sorrel action for Canadians ended on June 14, 1916. Indeed on that date the 3rd Battalion were resting and recuperating out of the lines. The battalion had lost 16 officers and 399 ranks to casualty with 132 lost or missing.

To compensate for these losses the Battalion received on June 17, drafts of 35 men from the 44th (Manitoba) Battalion and 90 men from the 46th (South Saskatchewan) Battalion. As well the entire early draft of 225 from Toronto's 75th (Mississauga Horse) Battalion was taken on strength June 19. If you consider the earlier massive reinforcements from the 9th Battalion (Edmonton), 23rd Battalion (Victoria, Vancouver, Calgary, Edmonton, Montreal), 60th Battalion (Montreal, 41st Battalion (French Quebec French speaking), the 3rd Battalion was no longer the domain of Toronto's mainly Protestant and strictly Anglo Regiments, the Queen's Own Rifles and the Royal Grenadiers. The 3rd (Toronto) Battalion had a composition  for the remaining years of the year from across Canada. This situation was much the same in the other Battalions in the 1st Canadian Division.

On June 24, now at full strength, the 3rd Battalion moved forward to relieve the 10th Battalion in the secondary line known as G.H.Q. 2nd Line. The evening of June 25 they supplied a working party of 390 men  to build a new trench from 20 to 40 yards in advance of the present front line on Mount Sorrel. (the goal being at some point to regain all the lost ground in the Battle of Mount Sorrel). The companies were quartered at Swan Chateau, Moated Farm, and Chateau Segard. Unfortunately, on the early evening of June 26, the sub-units billeted near Chateau Segard and Moated Farm found themselves under heavy shell-fire for no apparent reason. "B" Company suffered casualties of five killed, 12 wounded with 3 shell-shocked and "A" Company one wounded.  That was to be the end of death casualties for the month. The war diary entry for the 1st Canadian Infantry Brigade on June 26 states"Battalions resting. Dull day". 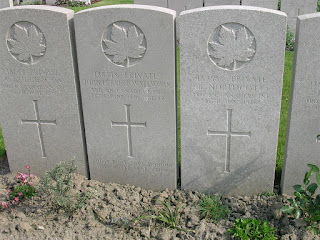 The five men killed needlessly on June 26 illustrate both the composition of reinforcements and the Battalion in mid 1916 as well as the brutality of the war. The profiles of the 5 soldiers follow: 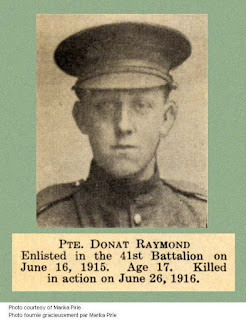 Enlisted Hull, Quebec January 14, 1915 in Quebec's 41st Overseas Battalion, an entirely French speaking unit. He was a 17 year-old school boy who lied on his attestation paper; rather than born in 1895, he was actually born in 1898. He was enrolled in Hull's newly formed 70th Regiment militia. Donat apparently volunteered for immediate overseas assignment as he was included in the 1st early draft from the 41st Battalion to leave Quebec June 17, 1915 on the S.S. Scandinavian. That draft on arrival in England was transferred to the 23rd Reserve Battalion where he trained until being included in a draft of 66 men, of which 54 were from the 41st, to be sent to the 3rd Battalion September 7, 1915. Killed in Action June 26, 1916 and buried in Llyssenthoek Military Military, Belgium.

Private Barney Northcott #457586
Enlisted Montreal June 23, 1915 in the 60th (Victoria Rifles of Canada) Overseas Battalion. Private Northcott claimed to be unmarried, born in 1892 in Nova Scotia and working as a machinist. His next of kin was his sister, "Mrs. Taylor" living at a Montreal address that may be fictional.. Private Northcott's background has been very difficult to document, I am inclined to think that his name is an alias. Some very qualified friends on the CEF Study Group Forum and not been able to find much family history as well. This man is a bit of an enigma. Nevertheless, Barney requested to be included in the 60th Battalion early draft to England from Montreal August 27, 1915. It too was transferred to the 23rd Reserve Battalion in Shorncliffe. Private Northcott was included in a draft of 19 men December 17, 1915 to reach the 3rd Battalion. Killed in Action June 26, 1916 and buried in Llssenthoek Military Cemetery, Belgium. 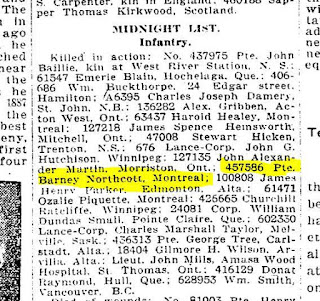 Private Albert Chiddenton #138143
Enlisted Toronto August 18, 1915 in the 75th (Mississauga Horse) Battalion. Private Chiddenton had been born 1882 in London, England, was married to Alice and the father of two young children. Employed as a clerk and living with his family at 258 Blackthorn Avenue, Toronto, Albert sailed with the full 75th Battalion from Halifax on the S.S. Empress of Britain March 29, 1916 arriving Liverpool April 1, 1916. He was included in a large draft of 224 men from the 75th sent to the 3rd Battalion June 19, arriving at the front lines June 20, 1916. Obviously this man had less than 1 month training time in England, although the 75th Battalion did get basic training in Canada at Camp Niagara. Killed in Action June 26, 1916 (6 days after arriving at the front) and buried in Llyssenthoek Military Cemetery.

Private Albert Victor Crick #140050
Enlisted Toronto July 23, 1915 in the 75th (Mississauga Horse) Battalion. Private Crick had been born 1891 in St. Helens, Lancashire, unmarried and worked as a "cooper's checker" in Toronto.He was a member of the 9th Mississauga Horse militia. It appears Albert requested to be included in the early draft from the 75th Battalion that sailed from Montreal on October 1, 1915. After arrival in England, Albert was assigned to the 23rd Reserve Battalion November 2 where he was promoted to Acting Lance Corporal on December 22. On February 19, 1916, L/Cpl Crick requested to revert to the ranks - that same day he was included in a small draft to the 3rd Battalion where he arrived February 21. Died of Wounds June 26, 1916 at #5 Canadian Field Ambulance and buried in Dickebusch New Military Cemetery, Belgium.

This is only one example of the War Wastage and needless loss of human lives - husbands, fathers, sons and solid citizens. Thousands of examples can be found that accelerated the requirement of healthy reinforcements to the Infantry Battalions of the Canadian Corps in World War One.

Thanks to my friends on the CEF Study Group Forum: Richard Laughton; Marika Pirie and Helen Russell for their contributions to my research.
Posted by Bob at 1:43 PM