The last of the three Sergeants from the photograph of the eight 3rd Battalion Sergeant friends of my grandfather, Cpl. John Cody, to survive the war was Sergeant Albert William Lancey #9575, 3rd (Toronto) Battalion. Albert Lancey had been born in Bristol, England in 1888. At some point, probably between 1910 and 1914, he immigrated from England to Canada and worked as a plumber at Polson Iron Works in Toronto, boarding at 7 Dean Street. He was actively involved with the 2nd Regiment, Queen's Own Rifles of Canada. On declaration of war, the single, 25 year old joined the Q.O.R. contingent headed by Lt. Col. Mercer for Valcartier where he was attested as a private into the 3rd Battalion, C.E.F. on September 22, 1914. Like his chum, William Jack, Albert served the 3rd Battalion through a number of early battles is 1915 and 1916 unscathed. At this point he listed his next of kin as his father, F. Lancey, living at 30 Horne Road, Ilfracombe, Devon, England. 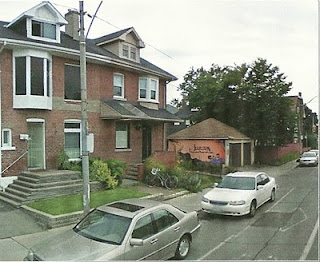 Albert Lancey had served three years in the Territorials in Devon, prior to emigrating to Canada so promotions came fast. First to Lance Corporal May 11, 1915. Then full Corporal June 30, 1915. Soon after being granted 7 days leave Corporal Lancey was promoted to full Sergeant January 1, 1916. Again serving through the Battle at Mount Sorrel in June unscathed as a Platoon Sergeant with "C" Company. However during the Battle of the Somme when the 3rd Battalion were in the trenches about 500 yards to the right of Monquet Farm and between the 49th Australian Battalion and the 2nd Canadian Battalion on September 9, 1916, our Sergeant Lancey's luck came to an end. "C" company and Lancey, were severely mauled. Sergeant Lancey was buried by an artillery shell and badly concussed. He also suffered burns and lacerations to his back. Other members of the 3rd Battalion killed from this action include Sergeant Arthur Nottingham, MM #63678 and Lieutenant E.C. Harvey, DCM,MM #9456. 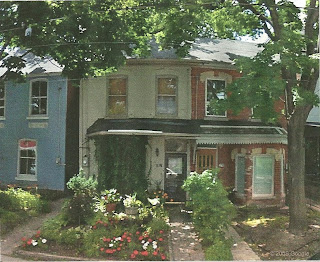 Sergeant Lancey was evacuated to England and spent 3 months in several hospitals convalescing from his wounds and apparent shell shock. He spent most of the remainder of the war training new troops in the 1st Central Ontario Reinforcement Deport (CORD). This service was interrupted in June, 1917 when he was granted permission to marry Dora Jennings Gordon at the church in St. Leonards, Kent. His wedding was attended by a number of his chums from the 3rd Battalion.

Shortly after returning from his marriage, Sergeant Lancey was posted to 12th Reserve Battalion, East Sandling and it was here he spent the remainder of the war in training mode. Wife, Dora, boarded in Hastings much of this time. June 21, 1919 he was stricken off service and taken off service Military District #3 Rhyl. Presumably he was part of the disciplinary team. At this time Dora appears to be living with his parents in Illfracombe. Later sent on "RTC" with dependants in Devon. (his wife and parents). He returned to Canada, presumably with his wife, on the S.S. Baltic August 13, 1919 and landed in Halifax. He was discharged August 28, 1919 in Toronto and listed his intended residence as 176 Major Street, Toronto. See photo at top. At some point soon after they moved to 353 Harbord Street, Toronto. See lower photo. 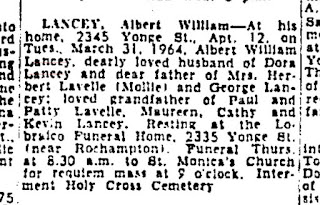 NOTES: There are several clips in the Toronto Star concerning this man and his military and medical status as well as his obituary. 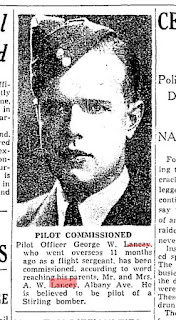 As well on THE MEMORY PROJECT Digital Archive is a Recording Transcript from his daughter, Mollie Lavelle. It can be found at this link.http://66.241.252.164/digital-archive/profile.cfm?collectionid=1655&cnf=wwI A transcript follows:

"My name is Mollie Lavelle. I am the only daughter of Albert William Lancey. His number, I'm almost positive, was 9575. He was a member of the Toronto Regiment, 1st Battalion, "C" Company. He fought the whole world war battles at Ypres, Somme and Vimy. He entered as just an ordinary soldier and he became a Sergeant.
He had many, many friends who had come from England when they were quite young – seventeen years of age or so – and stayed here for a few years and joined the Canadian Army when the war was declared. None of them were badly injured. He did have a back injury, for which he received a small pension. But he lived very, very well until he was seventy-five years of age.
He was a fine, wonderful man. A good father, and I couldn't say anything about him that wasn't good. He gave us a very good education, my brother and I, who was a dam-buster in the Second World War and awarded the DFC. His name was George Lancey. He was with the dam-buster squadron. 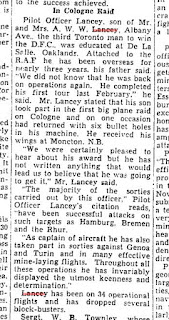 My father told us a few tales of the war. They were all about the good friends that he had and how wonderful the people were to them. He was married in 1917 to my mother, who was English, and he had returned from France just for the wedding. He was married on June the 30th, 1917 and I have a wonderful picture of their wedding, with the Colonel giving him what looks like a present of money or something, and all the men standing around with big smiles on their faces. It's a wonderful picture. He had to back to France, and he was there when I was born on January the 24th, 1919. He came home from France when I was three weeks old. They came to Canada in September 1919 and arrived in Halifax with all the other soldiers, and were interrogated there. They then came up to Toronto, where he resided for the rest of his life."