Another of my grandfather's friends from his photograph posted previously was Sergeant William Jack #9569, 3rd (Toronto) Battalion. William Jack was working as a boilermaker in Toronto and active in the 2nd Regiment, Queen's Own Rifles when war broke out in August, 1914. He had previously immigrated from Glascow, Scotland settling with his parents, William and Mary and younger brother, Joseph, in St. Thomas, Ontario. William answered the call when it went out to the men of the Queen's Own Rifles and at the age of 21, he got on the train in Toronto and departed for Valcartier and attestation into the Canadian Expeditionary Force. He trained with the "Dirty Third" on the Salisbury Plains during the winter of 1914/15 and followed them into the trenches of France February, 1915. 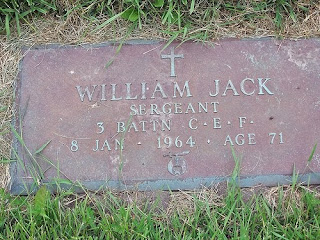 William Jack served in "D" Company with the 3rd Battalion and stayed with them through the Battles of 2nd Ypres, Festubert and Givenchy, relatively unscathed. He was promoted to the rank of Lance Corporal June 2, 1915 and to full Corporal August 8, 1915. After receiving and returning from 7 days leave in September, William was made an Acting Sergeant and on March 6, 1916 was promoted to full Sergeant with pay. However during the 1st Brigade's stand-to on Hill 60 during May, Sergeant Jack received a severe gun shot wound to his left ankle, fracturing the fibula. He was evacuated to No.3 Canadian General Hospital in Boulogne, thence to England and a series of General and Convalescent Hospitals. Upon discharge, he was taken on service to the 12th Battalion in West Sandling. However it was found that not only could he not march, but in fact had trouble even walking. Subsequently he was brought before a Medical Board at the Canadian Discharge Depot and found to have a permanent disability and "being no longer physically fit for war service" and having "very good military character". He was put on the S.S. Scotian and on landing in Quebec was granted a full discharge on February 10, 1917. 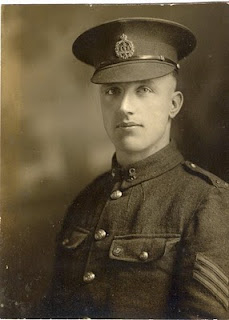 William returned to the family home in St. Thomas. His parents by this time had moved from 131 Erie Street to 151 Myrtle Street. After the war, William Jack married Margaret Colquhoun. They lived at this same family home until William's death on January 8, 1964. He is buried in St. Thomas's Elmdale Memorial Park alongside beloved wife Margaret. William was a proud Freemason and a member of the Ancient Arabic Nobles of the Mystic Shrine (a Shriner).

A fine, new picture of Sergeant William Jack #9569, 3rd (Toronto) Battalion has been added courtest of his grandson, Jack Wallen.