Born on January 27, 1893 in Bollington, Cheshire as the son of Walter and Eliza Schofield, Macclesfield, Lancashire. At time of enlistment in 1914: trade as carpenter, single, 2 weeks in the 5th Grenadier Guards, Church of England, 5' 10 1/2" tall, medium complexion, brown eyes, brown hair. Next of kin Walter Schofield. Emigrated to Canada May 2, 1913 from Liverpool on the SS Empress of Britain. 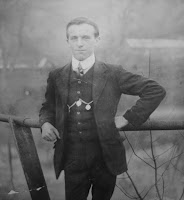 Killed in action October 7, 1915 in the line at Ploegsteert Wood. According to the War Diary 3rd Battalion for Oct. 7, 1915 7:00am, "Cpl. A. Schofield No. 63797 "D" Coy Killed in action". Later in the day, the 3rd Battalion was taken out of the line and ensconced in huts Aldershot Camp, Dranoutre. Corporal Albert Schofield was buried in  (Canadian Cemetery, Strand) Ploegsteert Wood Military Cemetery III.E.4