Born December 15, 1893 Montreal, Quebec one of nine children to parents Patrick and Elizabeth, natives of Harbor Grace, Nfld. At the time of attestation, his next of kin was listed as mother, Elizabeth, living at 437
Magdalen Street, Montreal. He was a single, laborer when he joined  A" Coy, 1st Draft of the 60th (Victoria Rifles Canada). His height was noted as 5' 6", fair complexion, blue eyes, red hair and weighing 117 lbs. Religion was shown as Roman Catholic in keeping with the family's Irish background. 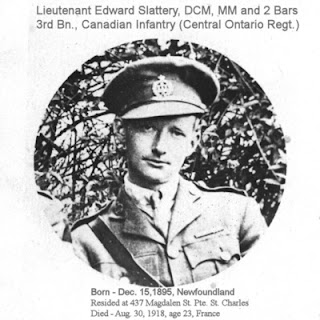 Joined the 60th (Victoria Rifles of Canada) Battalion on June 18, 1915 in Montreal. He was one of 250 men assigned to "E" Company which meant that he was put in the 1st Reinforcing Draft and sent ahead of the main body of the Battalion to England on the S.S. Scandinavian from Montreal on August 27, 1915. (the full battalion left on the same vessel and port on November 6, 1915). On arrival in England, this large draft was transferred to the 23rd Reserve Battalion in Shorncliffe. Edward Slattery was then sent to the 3rd Battalion along with a number of other men from the 60th Battalion on December 1, 1915 as badly needed Valley Cemetery, Vis-en-Artois, France, grave A.10
replacements.Treated for GSW to hand June 4, 1916 #1 Canadian General Hospital, Etaples. Returned to unit June 39. Awarded the Military Medal June 1916 for actions at the Somme.Promoted to rank of Sergeant October 8, 1916. Awarded bar to Military Medal April 9, 1917 for actions at Vimy Ridge. Awarded the Distinguished Conduit Medal for gallantry actions July 1917. Sent to 1st C.O.R.D. Cadet School December 31, 1917. Given Commission January 26, 1918 rank of Lieutenant. Rejoined 3rd Battalion April 9, 1918 as Lieutenant. Awarded 2nd bar to Military Medal June 7, 1918. Killed in action August 30, 1918 in the taking of Orix Trench, Vis-en-Artois, France. He is one of 31 men from the 3rd Battalion killed that same day, buried in mass graves in beautiful 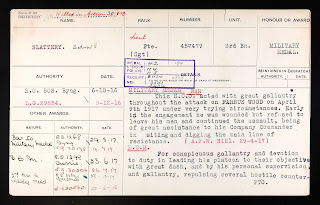 Lieutenant Edward Slattery was considered the most decorated soldier to fight in the 3rd Battalion and one of the most decorated in the entire Canadian Corps. His brother, Michael Slattery #458270, who had also enlisted in the 60th Battalion, was killed in action August 14, 1917 while in service of the 87th (Grenadier Guards of Canada) Battalion. A younger brother, 16 year old William Slattery #660815, served in the 163rd (French-Canadian) Battalion.