Born April 24, 1894 in Toronto to Auguste and Margaret Elsie Armour, 14 Willcocks Street, Toronto. At the time of enlistment into the 35th Battalion, Camp Niagara, May 29, 1915, Felix Bolte was described as single, student with the 2nd Regiment Queen's Own Rifles of Toronto, dark complexion, brown eyes, dark brown hair and his religion was Church of England.

Joined the 35th Battalion May 29, 1915 at Camp Niagara.Ontario  as a commissioned officer. He traveled with that battalion from Montreal on the S.S. Metagama Oct 16, 1915 for England. After arrival in England, Felix qualified as a machine gun instructor early 1916 and on April 6, 1916 is shown as a conducting officer for a reinforcement draft to the 5 CMR then entering the line with the 3rd Battalion shortly afterwards. Was shown as "shell shocked" August 16, 1916 (Somme) and sent to an Officer's Rest Station at Warloy. Granted 10 days leave November 6, 1916. Admitted hospital in England while on leave. Assigned officer's General List then 23rd Reserve Battalion May 23, 1917. Sent to 3rd Battalion, from Witley, March 22, 1918. Dispatched to 3rd Trench Mortar Battalion May 3, 1918. Returned to 3rd Battalion in the field June 4, 1918. Killed in action September 2, 1918. 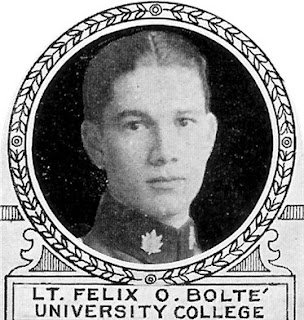 Killed in action September 2, 1918. From the Certificate of Casualty, "KIA - While this officer was in a shell hole during the operation in the vicinity of Bois-de-Bouche, an enemy shell exploded nearby instantly killing him". Lieutenant Felix Oliver Bolte is buried in Dominion British Cemetery, grave I.G.5. Felix's brother, Auguste Armour Bolte served in the war, also as a Lieutenant, with the 75th Battalion.