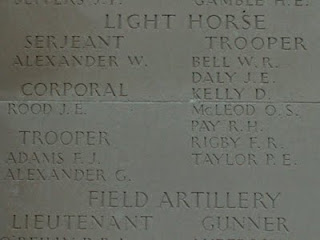 Family and friends that remember my wife Lynn's late father, Bill Alexander, may not know that he was named after a family member and World War One Veteran. Indeed Lynn and I did not realize that fact until we visited Ireland last year and the birthplace of Lynn's amicable father and his Alexander clan, in Ballysakeery, County Mayo.

William Alexander was a son of Joseph and Margaret (nee Carroll) Alexander and brother to Aaron Alexander, Lynn's Grandfather. Born in 1882, Lisglennon, Ballysakeery, Mayo, William left Ireland at some point and immigrated to the Melbourne area of South Australia. When World War One broke out in August, 1914, William enlisted as a Lance Corporal with the Australian Imperial Force at Sern Depot with the service number 104. He was assigned to the 3rd Light Horse Regiment, "A" Squadron in Canberra, listing his previous occupation as a "Policeman". He was later promoted to Sergeant Master Farrier and transferred to the 13th Light Horse Regiment. We know little about William's service with the 13th other than he left Adelaide, Australia with this unit on October 22, 1914 on the HMAT Port Lincoln. He would have fought in Gallipoli in the front lines with ANZAC forces with this unit and evacuated to Egypt in December 1915.


Later being sent to the Western Front in early 1916, the 13th Light Horse Regiment carried out traffic control, rear area security and prisoner escort tasks while being assigned to 1st ANZAC Division. In 1917, they were very active in the more traditional cavalry role of reconnaissance during the more mobile phases of battle.

William Alexander, #104, Farrier Sergeant died of disease on December 17, 1917. He has no known grave and therefore is listed on the Villers-Bretonneux Memorial, Somme, France. 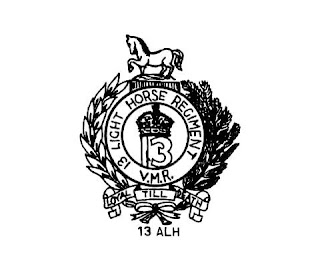 New information from the Ancestry.uk website and Australian new on-line documents service file states that at some point, William Alexander contracted Tuberculosis. He was hospitalized briefly and sent home back to Australia on a hospital ship. Apparently he succumbed to the disease on board the ship and was buried at sea. Hence his name is listed on the Villers-Bretonneux Memorial in France.
Posted by Bob at 7:11 AM