L/CPL HERBERT CLEARWATER, #201562, 1ST BATTALION
My wife, Lynn, never knew her maternal grandfather Martin Herbert Clearwater. In fact she barely remembers her grandmother, Mamie Clearwater. Therefore she was somewhat surprised to say the least when I recently informed her that her Grandfather had served with honour during World War One. 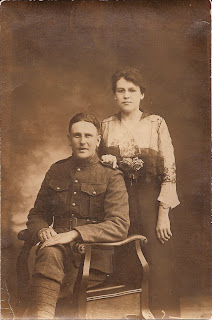 Her Clearwater family in Ontario originated when Great Grandfather Edgar Boviere Clearwater and his new wife, Philena Martin, immigrated to Whitby, Ontario from their New York Hudson Valley home. Edgar was the second generation in his family to "Anglicize" his surname. Originally known as Klaarwater, the Dutch family were one of New York's first families. Philena died in child birth 1863 leaving Edgar and 7 year old Floyd Wellington. Afterwards Edgar remarried young Mary Fisher and later the family moved to Huntsville, Ontario. Floyd was a printer and became Publisher of the Huntsville Forester, as well as Town Councillor, School Trustee and eventually Town Post Master. After marrying Ellen Martin, the young couple had six children with only three surviving into adulthood. The oldest was Martin Herbert (Bert) Clearwater.

When war broke out in August 1914, Bert was a "Driver" working and living in Toronto with his mother at 252 Albany Avenue who had left Floyd by this time and two younger brothers, Frederick and Gordon. He enlisted in Toronto's 95th Overseas Battalion being raised by the 2nd Queen's Own Rifles Regiment. Shortly before heading overseas with the Battalion, Bert married his Huntsville sweetheart, Mamie Keating and gave his address as 294 Concord Avenue. Son Roy Clearwater was born December 21, 1916 in Huntsville. The 95th Battalion headed by Lt.-Col.R.K. Barker and consisting of 36 officers and 1061 ranks departed from Halifax June 2, 1916 on the SS Olympic (sister ship to the Titanic)heading for England. In England, the 95th Battalion was broken up for reinforcements on the battlefields of France with Bert being taken on strength by the 1st Western Ontario Battalion in the trenches. Private Clearwater served courageously with the 1st Battalion until February, 1917 when he was admitted to hospital with Scabies and Trench Fever. He rejoined the unit and fought with them in the Battle of Vimy Ridge and Hill 60. Bert was sentenced to 3 days Field Punishment #1 for "being in an estamanet during prohibited hours" on July 21, 1917. On August 8, 1917, Private Clearwater was admitted to hospital with funicles (boils) on the legs and thighs. They were severe enough to get him a "blighty" being sent to a hospital in England and undoubtedly as a result of German gassing. After discharge from hospital, he was posted to the 4th Reserve Battalion promoted to rank of Lance Corporal. He served with this reserve unit for the balance of the war, probably training newly arriving troops from Canada. Bert was sent home to Canada from Kimmel Park Camp January 24, 1919 aboard the Cunard ship H.M.T. Aquitania from Liverpool arriving Halifax January 24. He was discharged February 19, 1919 at the age of 35 in Toronto from the Canadian Expeditionary Force as "Medically Unfit". He resumed his life with wife Mamie and together they had four more children including Lynn's mother, Joan Yvonne Clearwater. Bert's war service and medical problems followed him in civilian life with his death on March 23, 1934. He is buried within Park Lawn Cemetery, Toronto along with many of the Clearwater family including his father, mother, wife and a son.
Posted by Bob at 10:42 AM