One of the three survivors from my Grandfather's photograph of his eight friends was Herbert Arthur Wiles. Herbert was born in Byng Inlet, Ontario, a small community on the shores of Lake Huron's Georgian Bay north of Midland. He was working in Toronto as a clerk and was enrolled in the 2nd Queen's Own Rifles Regiment militia when World War One broke out August, 1914. When the QOR called for volunteers to join the forming Canadian Expeditionary Force in Valcartier, Quebec, the single, 22 year old was at the front of the line. His younger brother, Charles, still living in Midland at the same time joined Western Ontario's 4th Battalion. He likewise survived the war rising to the rank of Staff Sergeant. 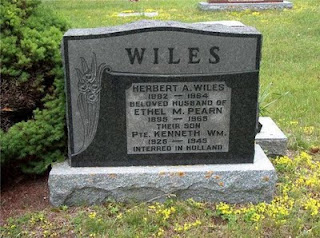 Promoted to rank of Corporal Herbert embarked with the 3rd (Toronto) Battalion for England and spent the wet winter of 1914-15 training with the Battalion on the Salisbury Plain. Cpl. Wiles survived the battles of 2nd Ypres, Festubert and Givenchy with minor injuries. He was promoted to rank of Sergeant July 20, 1915 and January 1, 1916 was promoted to Company Quarter Master Sergeant, "A" Company. He fought with the 3rd Battalion through Mount Sorrel, The Somme, Vimy Ridge and Hill 60 being hospitalized with scabies in 1917. Later in August, 1917 being attached to the Brigade Training School, he was stricken off service to the Canadian Corps Reinforcement Corps. In July 1918, Sgt. Wiles was invalided sick with Chronic Nephritis. He eventually returned to Canada September, 1919 after serving with the Canadian Discharge Depot in Witley Camp for seven months. A true war veteran!

Being discharged in Toronto, he moved back to his hometown of Midland after the war and was employed as an Electrician. We found his marriage in 1923 to Ethel May Pearn, 27, in Fenelon Falls, Ont. Herbert A. Wiles died in 1964 and is buried in Midland's Lakeview Cemetery along with wife Ethel, brother Charles and the rest of his family.

A tragic ending to this story has his only son, Kenneth William Wiles, joining the Royal Canadian Infantry Corps in World War Two and being sent to the Royal Hamilton Light Infantry in the field. Pte. Kenneth Wiles, #B/163616 was Killed in Action in Holland March 8, 1945 and is buried in Groesbeek Canadian War Cemetery. We will remember them!
Posted by Bob at 11:55 AM
Labels: SGT. HERBERT WILES