GRANDPA'S POSTCARD OF FRIENDS IN THE 3RD BATTALION

FRIENDS OF MY GRANDFATHER IN THE 3RD BATTALION
I was very fortunate to inherit the medals, photographs, postcards and correspondence from my late grandfather, John Cody, #62307, 3rd (Toronto) Battalion. Much of this material refers back to the three years he spent as a Prisoner of War in German Prison Camps. During this time he was treated brutally and physically abused, principally over his refusal to work for the Germans after his capture in October 1915 doing reconnaissance work in the Ploegsteert Woods area of Belgium.

One of the items he cherished, probably almost as much as his medals, was a photograph postcard sent to him in 1916 during his incarceration in Munster Prison Camp, of eight of his fellow Non Commissioned Officers in the 3rd Battalione 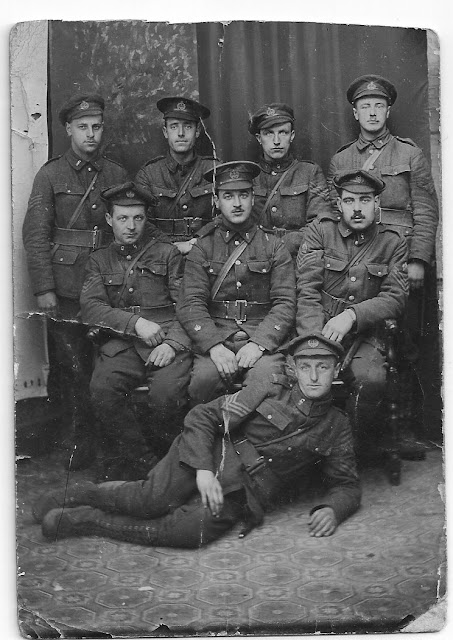 On the reverse of the photo are the names of the men and the following in my grandfather's handwriting "Comrades of my company whom I left behind at the front. They have all been killed since. Sent from Leeuwarden, Holland (repatriation), 1918.

We now know that in fact three of the men; Sergeants Wiles, Jack and Lancey, although all severely wounded, in fact survived the war and returned to Canada. I will be entering profiles on these eight brave men in coming weeks.
Posted by Bob at 10:52 AM